We had the Renault Kwid AMT with us for a few weeks and with an AMT gearbox it seems ready to take on the city traffic madness, so can it perform its designated duties competently? We try to find out!

As more and more buyers are leaning towards automatics, there really was the need of an affordable one to come to the market. Thus Renault Kwid AMT was born out of need, the need of something which would ease up the hassle within the tight confines of a city. Kwid AMT really fits the bill with a sticker price of INR 3.84 lakh for its RXL variant and INR 4.32 lakh (both ex-showroom Delhi) for the top of the line RXT(O) variant. It is cheaper than even the Maruti Suzuki Alto K10 AMT variant, so it sure looks like a value for money proposition on offer. Now the Renault Kwid has been in the market for a little more than a couple of years while the AMT version was launched at the end of previous year and we have already brought for you a first drive review of the Kwid AMT. But this time around the idea was to analyze its capabilities in the long-run. How is it to live with and whether or not it can duly perform its duties of being a good city commuter and on the odd occasion be a medium for short weekend getaways. As we test the Renault Kwid AMT in Delhi which as an urban jungle is home to the highest number of vehicles per capita in the country, there were quite a few take away’s to project that this automatic small car is worth a consideration. Also Read: Renault Kwid 1.0-litre AMT: First Drive Report 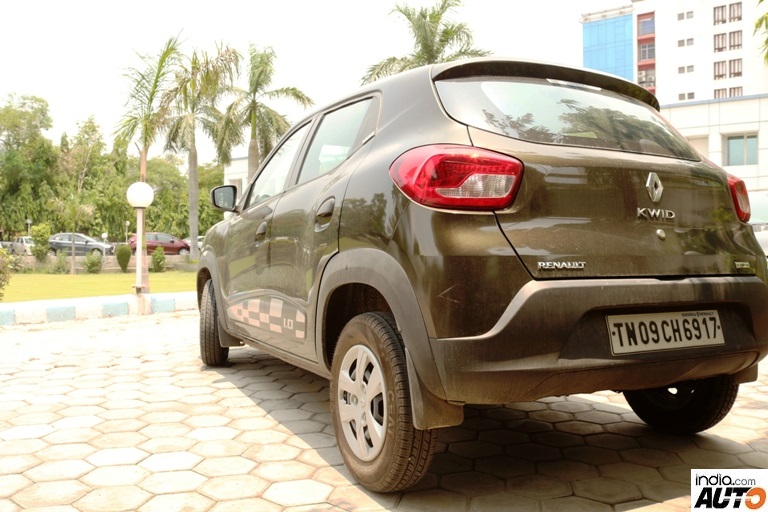 Renault Kwid AMT: What does the Automatic amount to?

The First and most striking feature of the Kwid AMT is the dash mounted AMT dial with three operation modes namely – Neutral, Drive and Reverse. The position of the dial is a tad awkward and some might actually mistake it for an AC knob. It takes a wee bit of time getting used to it but once you have got the hang of it, it actually takes the term Easy-R literally. Also Read: Renault KWID 1.0-litre: First Drive Report 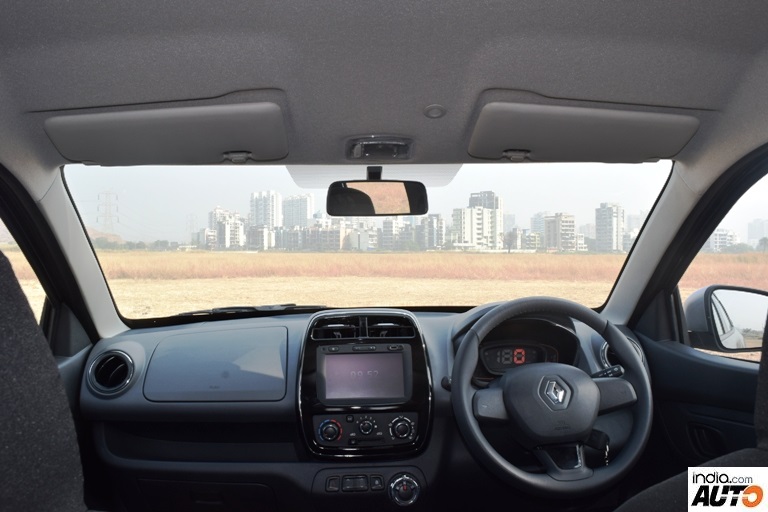 A bit more in detail, this 5-speed Easy-R gearbox is developed by Renault in-house with hardware from Bosch and software from FEV (US based Engineering service). The AMT in the Kwid does not feature a creep function which means that in stop-go traffic you can put in precise amount of throttle inputs and dont have to bother squeezing the brakes every now and then. While the jerkiness that we associate with the AMTs, is evident in the 1st and 2nd gear everything else smoothens out after that. This AMT shifts quick enough to provide swift takeovers within the city limits while the lurches in between the gears is kept to the minimum. Also Read: Renault KWID: First Drive 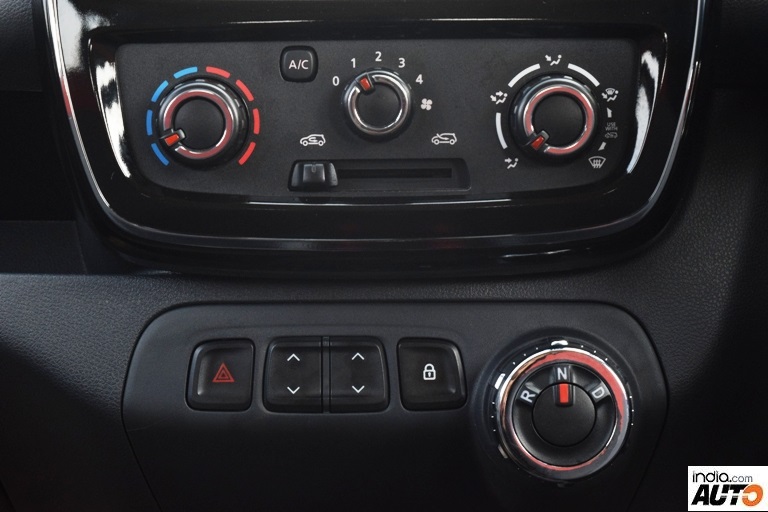 As mentioned earlier, the only chink in the armor of the Renault Kwid AMT is that due to the absence of a creep function or hill hold assist, one will find some difficulty in taking it up an incline especially in tricky situations. Also while parking in tight spots, the twitchiness of the AMT makes it a bit cumbersome to find out the precise throttle input. But overall, the 5-speed gearbox performs potently and helps makes the life a bit easier if yours is one of the million cars on the road in a metropolitan city. Also Read: GST Effect: Renault Duster, KWID & Lodgy prices reduced by up to INR 1 lakh 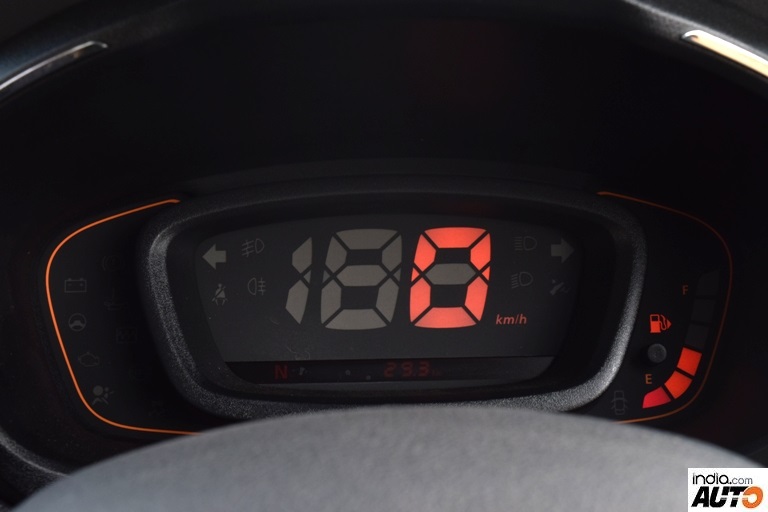 Renault is offering AMT only with the 1.0 litre, 3 cylinder petrol engine which churns out 67 bhp and 91 Nm of torque lending it a sense of spirited performance. With no gearshifts to worry about, you can floor the pedal on the Kwid to have some fun. The 1.0 litre engine is one of the best in class and offers enough grunt to not let you down even on the highways and can hold triple digit speeds while maxing out at 120 odd kmph. Also the NVH levels are something that needs to be looked into as engine noise is audible even from 50 kmph in case you decide to put the pedal to the metal. 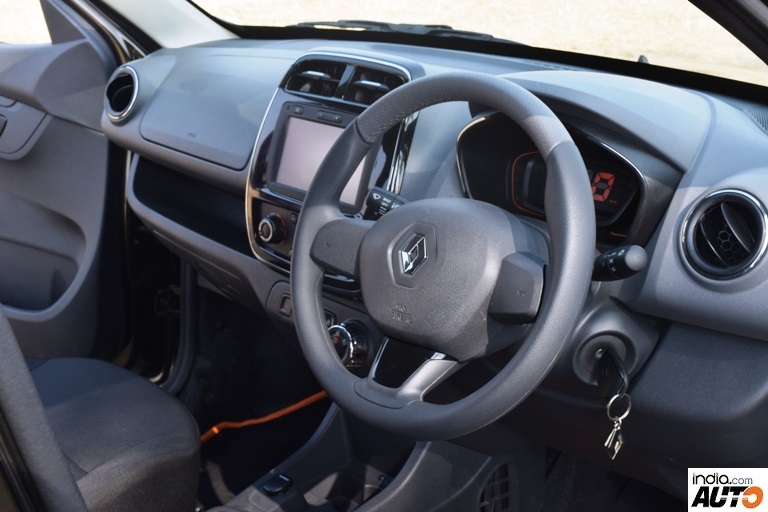 Steering characteristics are a bit oxymoronic as it is very light making it a boon in tight spots whereas the same feel at high speeds calls for a bit more attention and reduces the confidence. Also, the end to end rotations of the steering is much more than say, an Alto. The brakes can also do with a bit more bite and the lack of ABS calls for careful driving but when then I realise the price point at which it is available and it seems acceptable. Also Read: Renault Kaptur spied alongside Hyundai Creta; India launch date, price & images 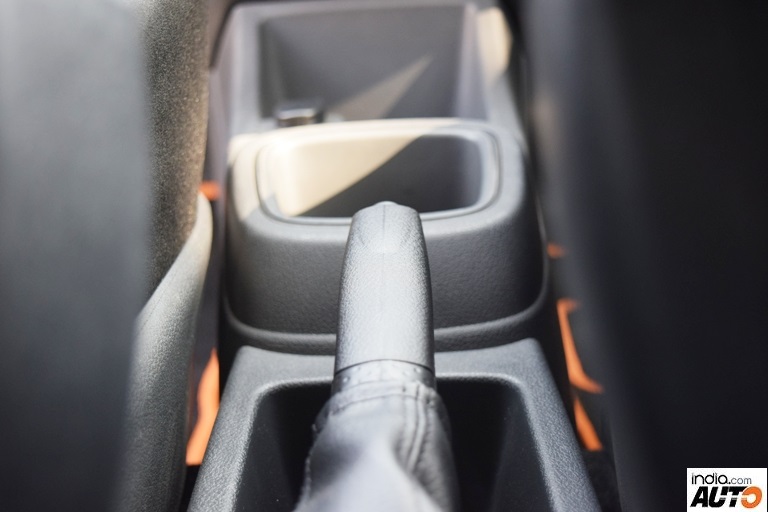 As it lacks a gear lever, all the space in the central console is freed up and the deep cubby holes can hold cans, phones and spare change. This is not it, as it gets dual glove box with a deep recess in between while the door pockets can hold only a half litre bottle and some papers. It has been out in the open by now that Kwid offers best in class interior space and you can actually fit in 5 adults although for a short trip within the city. Moreover, the boot space of 300 litres nears cars much above its segment and can swallow even two large bags easily. Also Read: New Renault Duster 2018 unveil on June 22; Global debut at Frankfurt Auto Show

While wading in the traffic, two things that bring a huge respite are the 7-inch touchscreen infotainment system with a user-friendly module offering USB, AUX, MP3 and Bluetooth connectivity to answer calls on the go. The two speakers on the extreme ends of the dashboard, however, prove to be a dampener but nothing that an aftermarket unit cannot fix. The A/C unit is also something that kept us calm in the soaring hot weather and didn’t take more than 5 minutes on almost every occasion to cool the cabin. 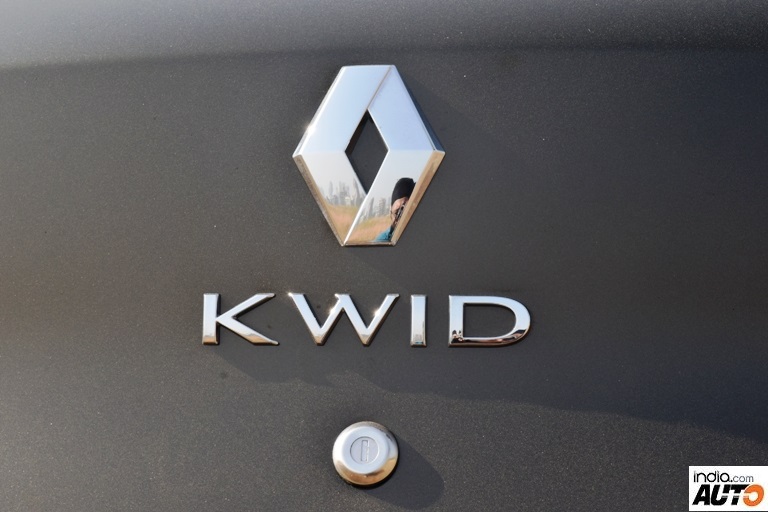 Renault Kwid AMT: Should you go for it?

Well, the Renault Kwid is already a brisk selling product in the entry level segment and has single-handedly taken the French automaker among the manufacturers that are to be taken seriously. It offers a best-in-class infotainment system, loads of space for people as well as luggage with a fun and breezy driving experience. Thus the Renault Kwid AMT has a lot going for it and will appeal to the first time car buyers with its ability to serve the purpose of families, office goers and even college students.