Spacious and better built. It still isn't the leader in its class

The Tata Indica range has seen a lot of changes in the last decade. One major change, though, was the introduction of a bigger sibling – the Indica Vista. The Vista itself has gone through some upgrades in the past – and continues to do so even today – in typical Tata fashion. What we have reviewed here is the new Vista facelift which, as Tata claims, has improved further on an already robust product.  Also Read - BMW India to launch Z4 facelift in November?

With the new Vista facelift, Tata plans to offer a ‘sedan class’ experience. Therefore, the new Vista gets upgraded style, performance and entertainment to match up to a sedan. To help their customers draw easy comparisons, the Vista’s sedan-inspiration comes from its portfolio sibling, the Indigo Manza. The most striking difference on the facelift Vista then comes in the form of the new front fascia. It borrows all the vital elements from the Manza to evoke better style and a classier stance.  Also Read - Toyota launches GT86 Cup Edition 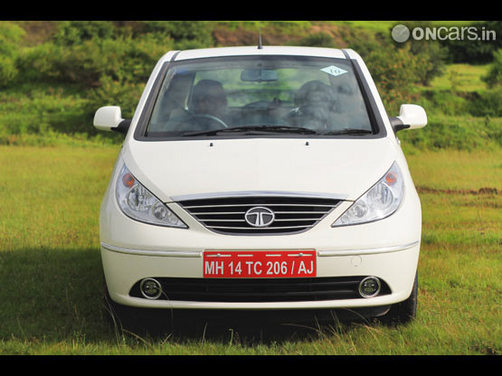 First-up are the triple-barrel headlights which make the Vista look a tad more aggressive and also provide better illumination. Next in line is the chrome grille which still retains its ‘smiley’ form. The ‘T’ logo on the grille has grown bigger and features a unique ‘T-weave’ mesh for its background. The front bumper gets restyled, longer air-dams with integrated chrome surrounded fog lights.

Adding a classy touch (and even more chrome) are the rub rails on the front bumper (see detail) and doors, the window strips and the body coloured door handles (see detail). From the side profile, the new Vista is exactly similar to the outgoing one – which means that the wheel wells are still too big for the tiny wheels that the Vista is shod with. We would have loved to see 16-inch wheels, purely from a design perspective, but 15-inchers should be a good balance between design and ride comfort. The current model comes with 14-inch dual-tone alloy wheels on the top-end variants while the base and mid-range trims get 13-inch steel rims with decently designed wheel caps. 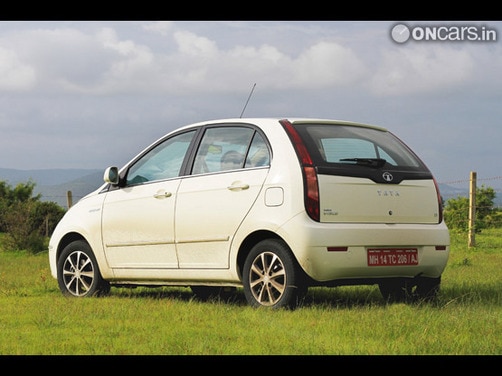 The new Vista’s tailgate gets quite a few upgrades too. To begin with, there is a mirror-finish, gloss-black appliqué under the rear windshield which dons the ‘T’ logo. Complementing its black finish are the new taillights which get a black outline (see detail). The thickness of this outline makes the taillight lens look ‘smoked’ – adding a hint of sportiness to the tailgate. With the new Vista, Tata also puts into practice a new naming nomenclature viz. LS / LX / VX / ZX / GLS / GLX / GVX / GZX as replacing the earlier Terra / Aqua / Aura / Aura+. These variant badges and the emblems of the new Vista have grown bigger and get a new font (see detail). And though Tata wants the Vista to move away from the ‘Indica’ tag, the emblems still call this car an ‘Indica Vista’.

Overall, the new design makes the Vista appear classier and slightly sportier than its outgoing model – however, in the two days of driving that we did around shopping malls and marketplaces, hardly anyone noticed the difference in design – including an uninitiated friend of ours who owns an Indica Vista himself. 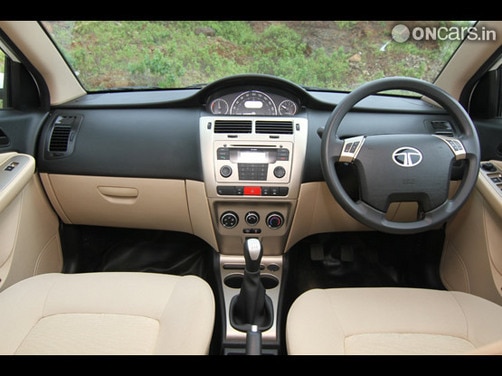 Tata has tweaked the way the doors feel when you open / shut them. The metallic thud is now more solid and doesn’t feel as clumsy as before. Get inside the car and for the first few moments the new Vista feels exactly like the 90HP model that debuted in 2010. Spend some time in the car and the novelty becomes evident. The dashboard still has a sandwich design with black finish on the flooring and the top section of the board, and a beige scheme bisecting the two. The beige, however, is darker in the new Vista to reduce soiling in our dusty conditions. While the ebony-black top helps in the reducing reflections in the windshield while driving in broad daylight; the black flooring tackles dirt and muck better than beige does. Though an all-beige trim makes the interiors look bigger, Tata has traded it in for a black-beige scheme for easy maintenance – which is a good move. 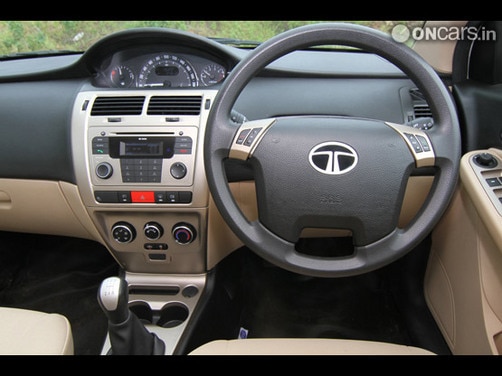 The Vista still carries forward the centre-mounted instrumentation console (see detail), which we dislike. We would rather want the classy design of the Manza’s interiors to flow into the Vista too – especially when the new Vista touts itself as a ‘sedan-class’ hatchback. The centre console on the Vista’s dashboard carries forward the design of the earlier model. The AUX/USB/CD/Bluetooth compatible Blue5 entertainment system (see detail)  which can pair up to five cell-phones is now available from the second trim onwards. It gets steering-mounted audio and phone controls as well. Speaking of which, the buttons on the steering wheel have been redesigned and sit slightly deeper as compared to the ones on the Aria / Manza’s steering wheel. This prevents them from getting pressed accidently when turning the wheel or operating the horn. 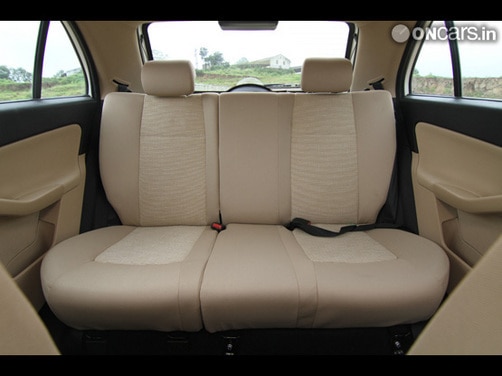 The steering is tilt-adjustable like the one in the outgoing model and is available in the third and fourth level variants. It is complemented by the driver seat which lets you adjust the height and lumbar support for a comfortable driving position. Comfortable seating has always been the Vista’s forte and the new Vista is no different. The rear bench still manages to seat three adults in comfort, thanks to its flat construction (see detail) and the generous headroom that the Vista offers. However, to expect sedan-class comfort, we would have liked a centre arm-rest for both, the front and the rear. The rear bench also has inadequate storage compartments and the inclusion of the seat pockets and larger door-pockets would have helped. The rear bench gets a 12V socket (see detail) though for cell-phone charging, car inverters etc. 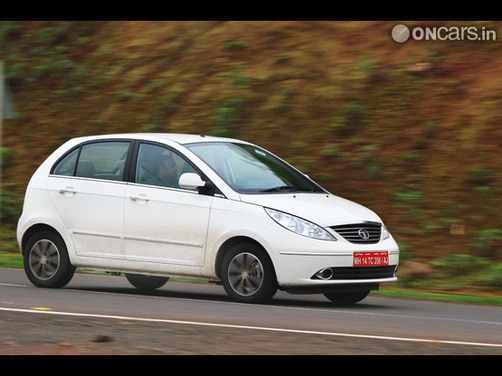 Very little has changed mechanically in the new Tata Vista. It still gets the same engine options – a 1.4-litre Tata turbo-diesel engine for BS3 cities (TDi in Tata-speak), a 1.3-litre Multijet diesel (Quadrajet), a 1.2-litre-65PS petrol (Safire 65) and a 1.4-litre-90PS petrol (Safire 90). The car we sampled was a Vista Quadrajet ZX, meaning we had the Fiat sourced 1.3-litre Multijet engine under the hood, that puts out 75 PS or power and 190 Nm of torque. Typical to the 1.3 Multijet, this motor has very little punch under 2,000 revs. While this translates into a smooth power delivery while trotting through bumper-to-bumper traffic, it also means that you may need to downshift while making overtaking manoeuvres, unless you want to wait for the turbo to spool up. 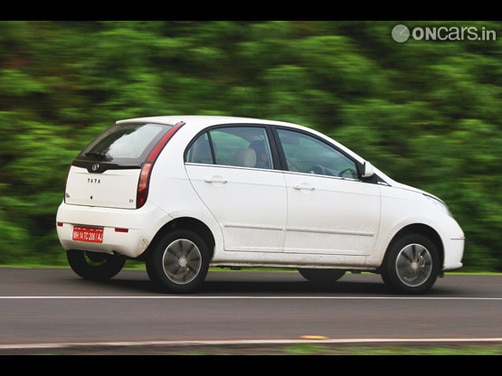 On open stretches of the road, overtaking a truck or a bus isn’t a big deal as the turbo is dialled in from 1,750 revs. Like the similar-engined Swift though, the Vista too has a sudden jerk close to 2,000 revs when turbo kicks in and therefore, you need to plan the overtaking moves in advance to avoid a sudden surge of power surprising you. On the highways, the Quadrajet mill can cruise at 120 kmph at a comfortable 2,500 revs. Keep it in the 2,500 to 3,500 rev range (under 2,000 revs in the city) and the diesel engine will return you a fuel economy of close of 20 kmpl on the highway and around 17 kmpl in the city.

Within the city, the Vista has always been a brilliant car to drive. While all the engines in the options list have their own characteristics, most of them have decent low end power for tackling urban traffic. The steering feels light at lower speeds and is well-weighted when cruising on higher numbers. The Vista’s steering wheel returns better feedback than the older model’s rather dead steering. It isn’t as direct as the new Swift’s steering though. 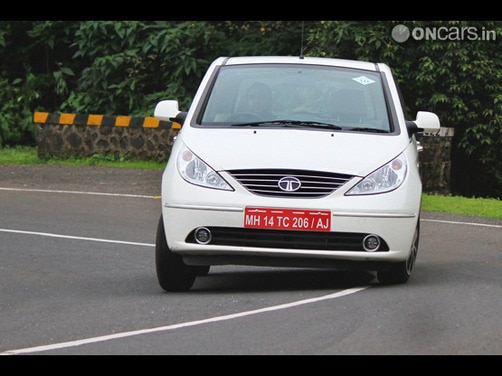 The new Vista gets re-tuned suspension as well. While a comfortable ride was always the Vista’s trump card, it did suffer from tremendous body roll and lack of grip. While the body roll is still an integral part of the Vista’s handling characteristics, it isn’t as unnerving as before. The Goodyear tyres complement the suspension by providing phenomenal grip and very little squealing. We pushed the Vista hard around corners in half-wet conditions and there was no hint of sliding or loss of control even once. Under hard braking too, the tyres hold their grip rather well and can bring the car to a standstill from 80 kmph in under 2.6 seconds and 35 metres. We would like to see more manufactures shift to these tyres than the MRF ZVTVs that the new Swift was shod with.

With every passing upgrade, the Vista feels better and more mature. With the new upgrade, it not only looks smarter, but acts a smart alternative to other hatchbacks as well. With its engineering and aesthetic improvements, it aims at combining the features, comfort and space of a sedan while offering the convenience of a small car with respect to congested urban environs and tight parking spots.

With four engine options and four trim levels to choose from, the new Vista also offers a wide array of variants to suit your particular needs. With its competitive pricing and a strong dealer/service network, the new Vista is definitely a strong contender in the evergreen hatchback competition in India. Simply put, don’t look at the Manza as a feature-rich Vista with a boot, instead, look at new Vista as a feature-rich Manza without the boot…