From concept to production model, Tata's Nexon is nothing short of a commendable effort. Is it worth the wait and would Tata Nexon be able to make a mark for itself in the compact SUV segment is what we are here to find out!

Tata Motors is entering an all-new segment that will defy odds to prove its yet another image makeover. It started right at the Tata Tiago going on to Tata Hexa, Tata Tiago and now the Tata Nexon. The journey over the last couple of years has been transforming for the home grown manufacturer which why they thought of taking a pod shot at the SUV segment but by not going to traditional way of making something big and rugged. It’s the compact size, innovative design and the willing to cater to something totally ‘Out Of The Box’ is what we have in the form of All-New Tata Nexon. What is like to see, feel and be in let’s go-head and experience for ourselves shall we? 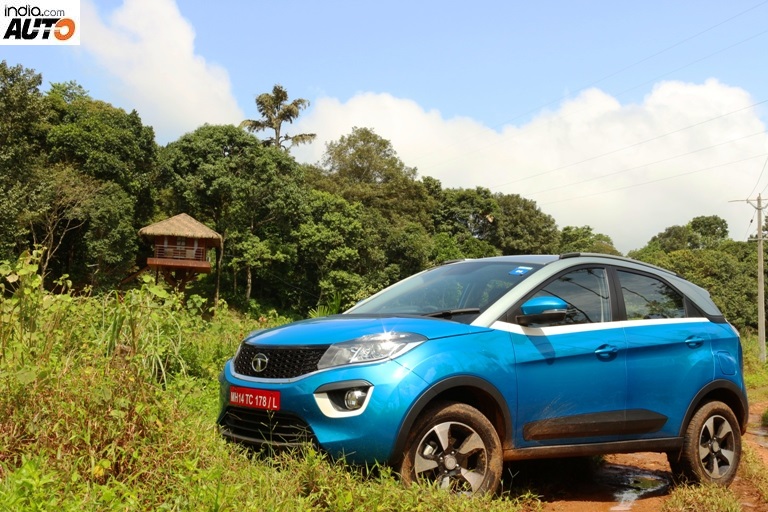 This is for the first time that a manufacturer has actually managed to make a vehicle that resembles what the prototype looked liked when showcased for the only time during 2016 Auto Expo. It’s surprising to see that the design has been kept as original as possible. That apart, the Tata Nexon is very SUV like and funky looking from the outside. 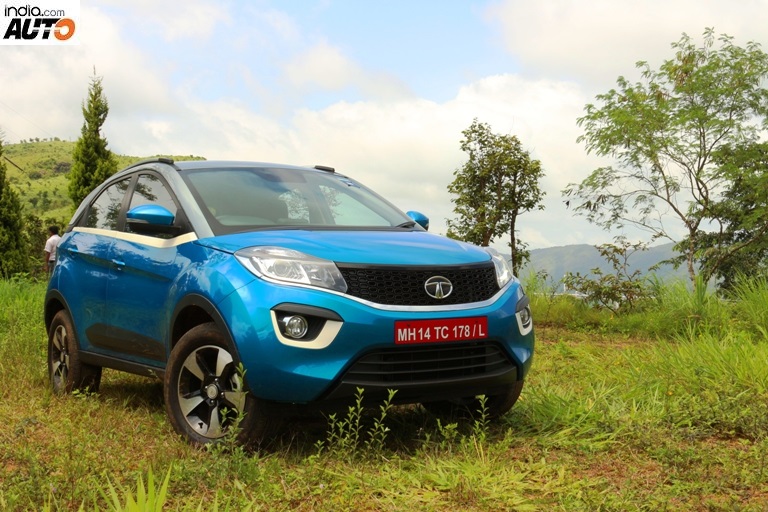 Key design elements to take notice are the Chrome Humanity Line that integrates well into a pair of stylish projector headlamps with feline- eye shaped Daytime Running Lights. Further the presence of a honey chrome grille up front along with white accents around fog lamps and a rather wide stance make the Nexon look very unique. Nevertheless to say that a ground clearance of 209mm (unladen) helps the cause. 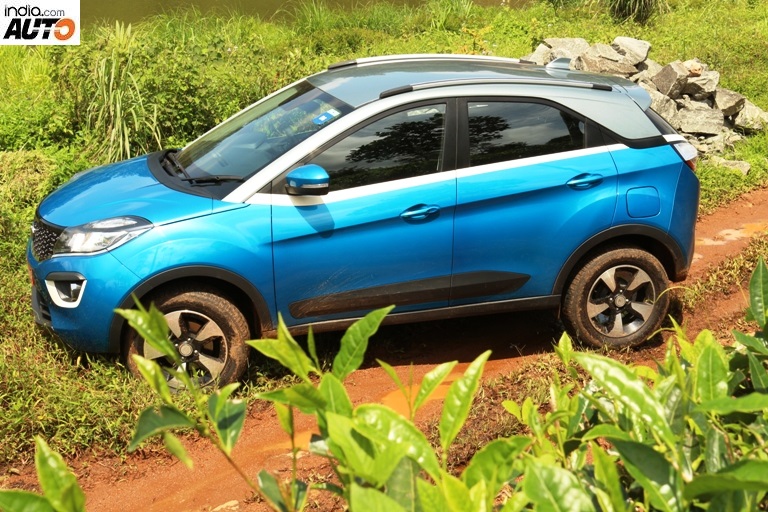 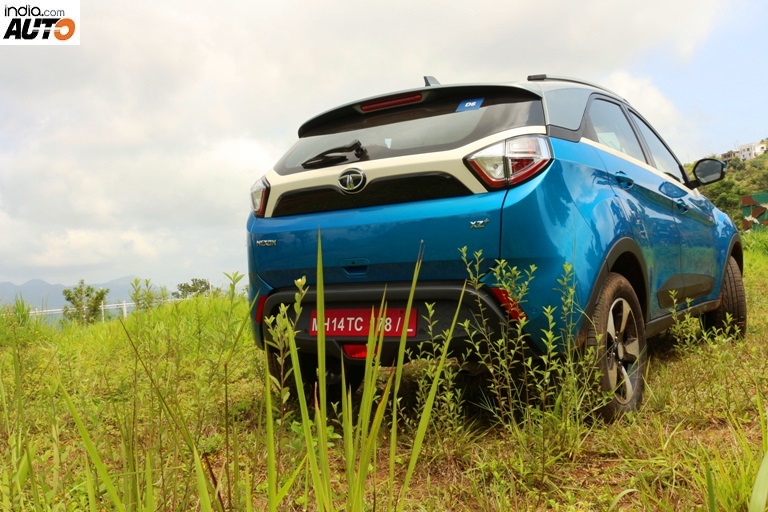 Coming to the rear, it’s wedge shape tailgate is the focus of attention as it caters to a roof mounted spoiler, a continuation of Ivory White accent strip that disperses into a v shape design on the either ends surrounding crystal clear LED tail lights. A rather protruding lower end with the presence of black plastic cladding on the bumper, a rear diffuser and vertically inserted reflector inserts make the rear end of Tata Nexon very attractive. 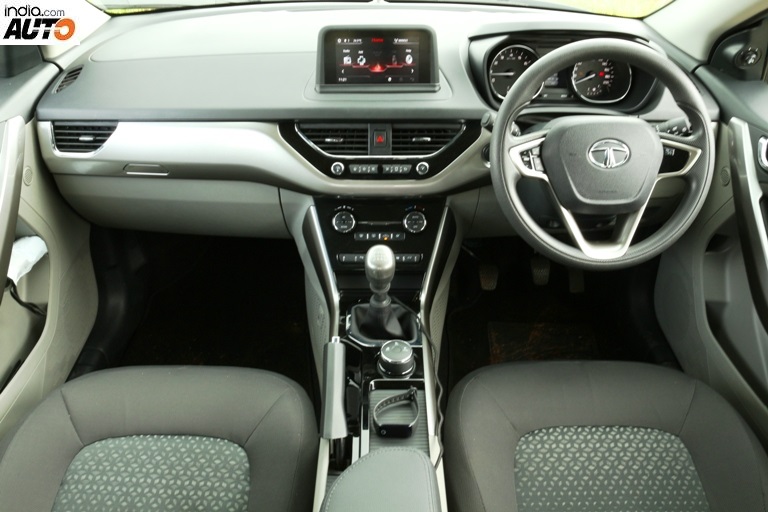 As this is the place where most of us spent majority of our time, Tata Motors has ensured that like the exterior design, the interior too has loads to offer to the perspective customer. To begin, there is a dual tone cabin which provides a mix of black and light grey. Unlike what we have been seeing in the past with the Impact Next Generation cars, this time around Tata Motors has taken a slightly different approach which is that the center console stands to provide a 6.5 inch floating dashboard touchscreen. Also Read: Tata Nexon bookings open; India launch soon 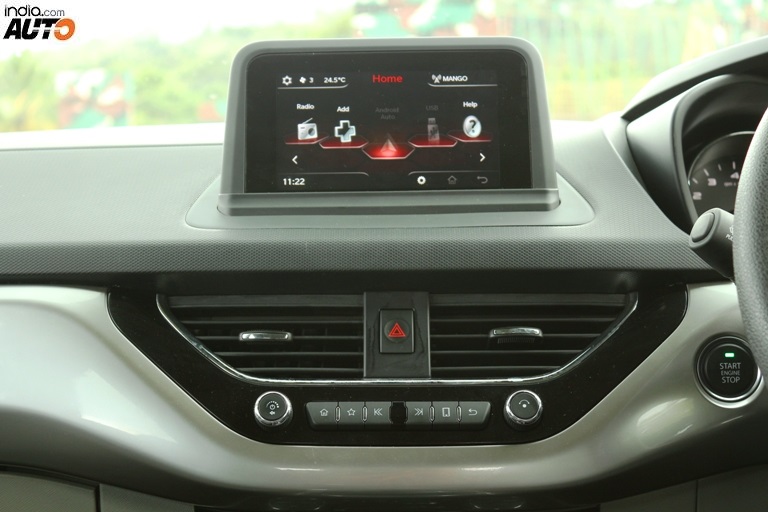 This Touchscreen therefore comes compatible with Tata Motors Connect Next Infotainment system that is powered by Harman. Thus the system is well equipped with smartphone connectivity features like Android Auto, Apple CarPlay, Navigation, it also doubles up as reverse camera. Speaking of Apple Car Play, the manufacturer is believed to be still working on the integration part however they say that it will soon be a part of the package. 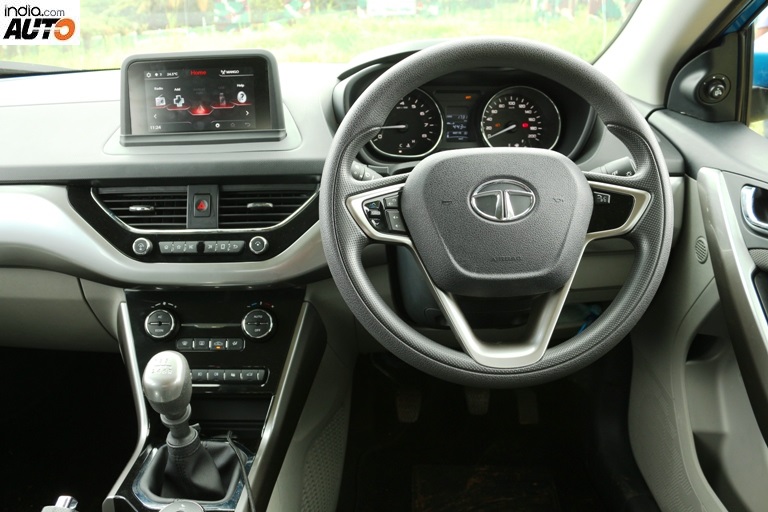 With vocal interaction available for navigation, reading and replying to text and Whatsapp messages, the Nexon indeed is feature loaded. Its 8-speaker JBL surround sound system just pushed up the appeal even more further. As for the instrument console, it is similar to that off the Tata Tiago and Tata Tigor as it still complements the overall feel of this compact SUV. Also Read: Tata Nexon price in India, launch date & specs: 10 important facts to know 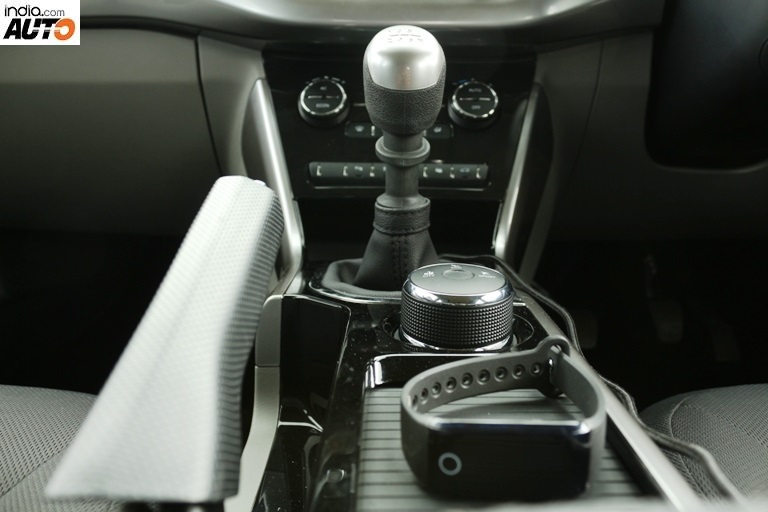 Shifting to comfort, since the Tata Nexon has a coupe like silhouette there is ample of headroom for occupants seated up front as well as the rear. While good amount of shoulder and legroom ensures a good experience of the cabin. However seating the third person in-between towards the rear could be a bit of problem due to lack of space. 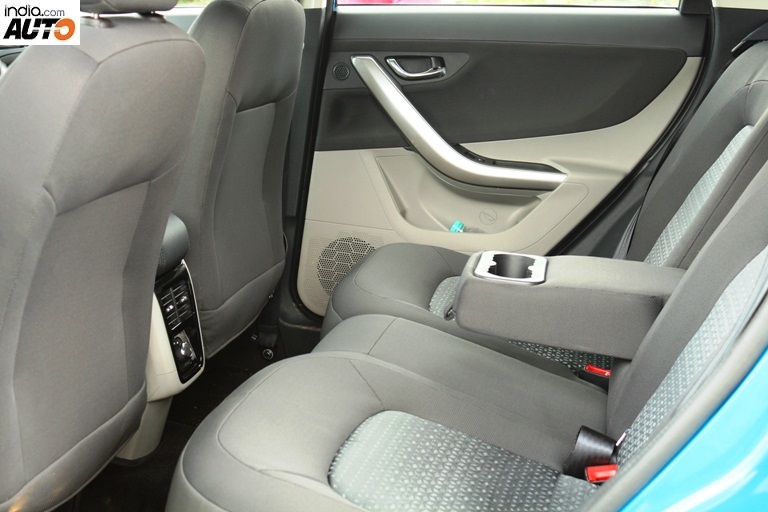 The seats are contoured in such a way that they feel a bit cramped. As for the rest, both rows offer black seat upholstery that are well cushioned to provide supreme comfort with decent amount of under thy support. That said, the lumber support is a bit of a concern due to it hard feel which could become an issue for lower back pain especially while embarking on long distances. 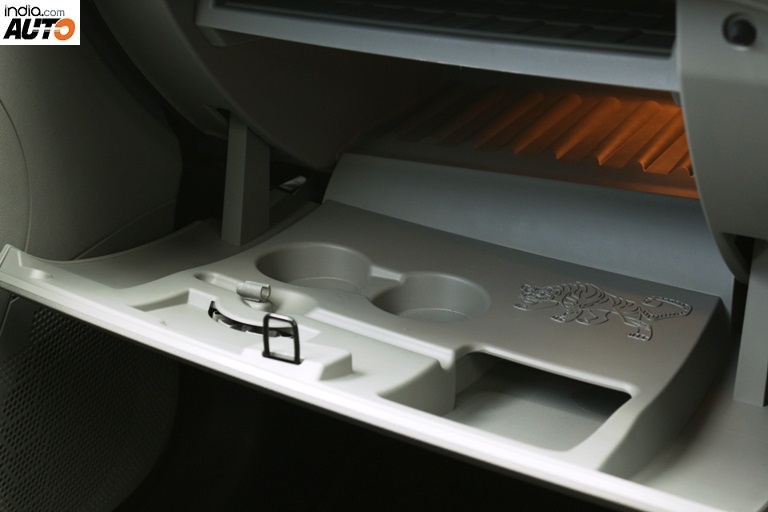 Thinking is this all? Well the Nexon has many utilitarian perspective as well such as a large glove box which has a very deep bay not only hold important documents but also to double as a glass holder for two. It has a tiger embossed on it which states the interior design philosophy that seems to be inspired from this predator. In fact while magnifying the rear windscreen from the inside is then that you will notice that there are two tigers available there also reiterating the design ideology behind this SUV. Also Read: Tata Nexon Rolled Out of Ranjangaon Plant; Price in India, Launch Date & Engine Details 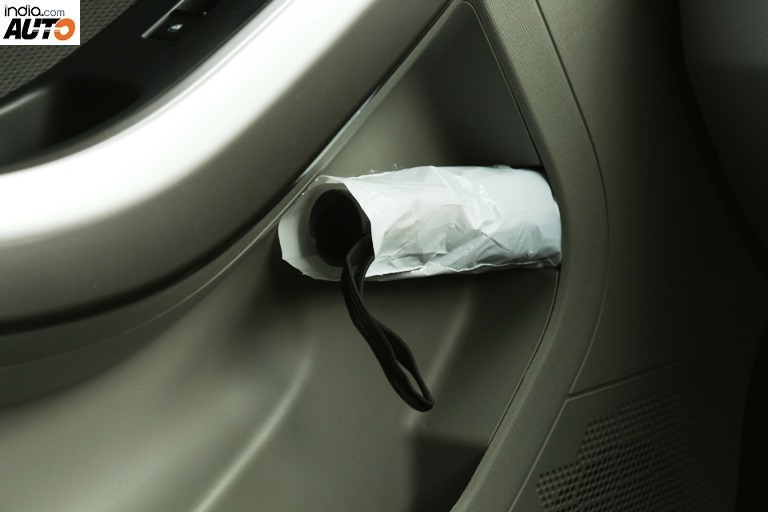 One of the premium features which can be found especially in ultra premium saloon’s like the Rolls Royce is the availability of a dedicated place for keeping the umbrella. Tata Nexon like any other Rolls Royce has the facility of holding two umbrella’s on either side of the front door panels. The door pockets are deep and also have the facility of accommodating a 1 litre water bottle. 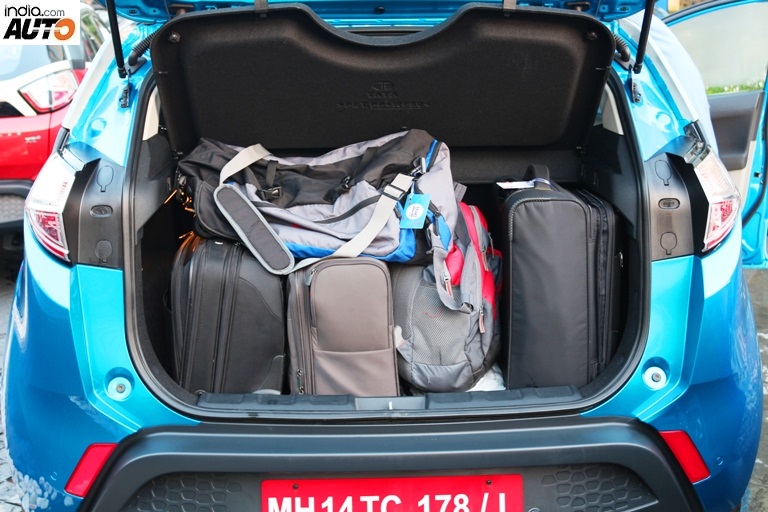 In their presentation, Tata Motors laid emphasis on storage by saying that this compact SUV is designed in such as way that it can incorporate a full size washing machine that brings us to the question of all important boot space. The Nexon therefore offers generous boot space of 350 litres that can further be extended to 690 litre by simply putting the 60:40 split rear seats down. 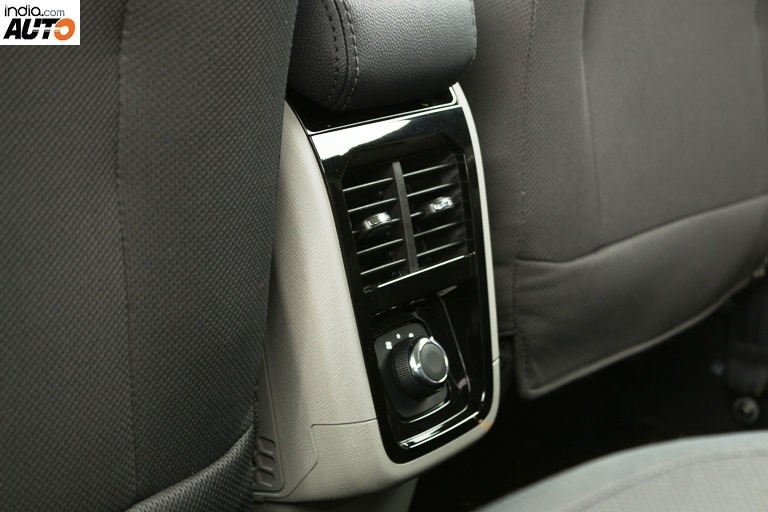 With safety being an important aspect to any vehicle, the Nexon is loaded with dual front airbags, ISOFIX (Child Restrain System for rear seats), Anti-lock Braking System with Corner Stability Control as standard fitment across all variants. Another very note worthy feature to discover out here is the Keyless entry function that only on offers a key but also has a wrist band that allows the driver to enter and exit the vehicle without having to use the other appliance (key basically). 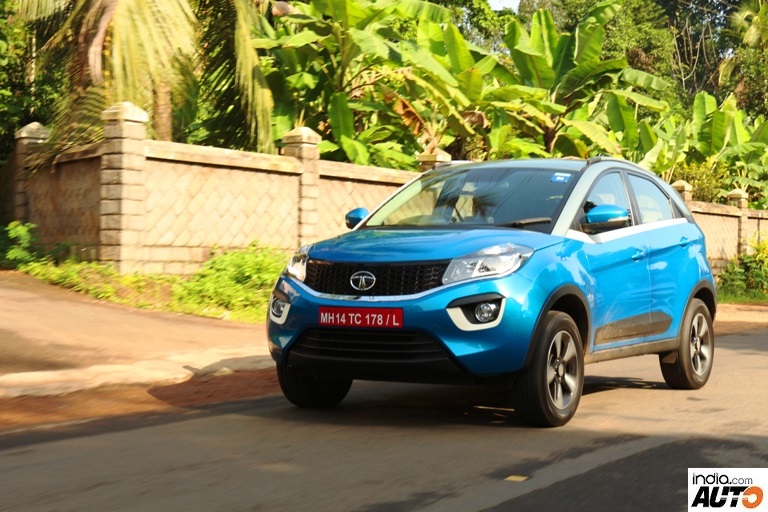 With its impressive looks and interior comfort does the Tata Nexon deliver on performance lets find out? Tata Motors has fitted the Nexon SUV with two powertrains namely a 1.2 litre 3 cylinder Revotron Turbocharged petrol engine and an all-new 1.5 Litre 4 cylinder Revotorq Turbocharged diesel engine. The former delivers 108 bhp of power output with 170 Nm of peak toque while the latter produces 108 bhp and 260 Nm torque. Both these engines come matted to 6-speed manual transmission. 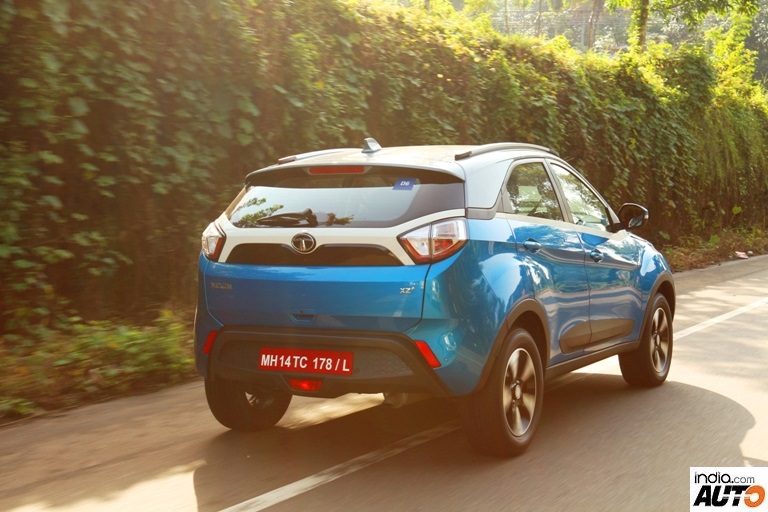 To sample both these variant, we were first handed out the keys of the diesel so without any delay let us get down on telling you how is it to drive. In relation to how any diesel engine would sound, the Nexon’s diesel powertrain in idle is fairly quite and thus the NVH levels are limited to a minimum. The level of refinement too is great which means that the rate of acceleration is linear without any lag. 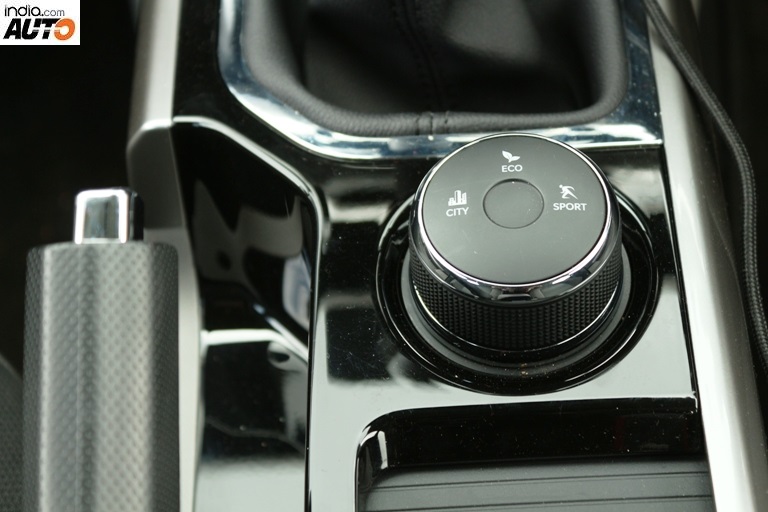 To enhance the overall driving experience Tata has provided the Nexon with 3 different driving modes names Eco, City and Sports. Eco Mode as the name suggests is for economical driving while the City Mode stands to deliver better power and torque. While in the Sports Mode the engine is in its most spirited form waiting to deliver out right performance. Unlike in idle where the cabin is relatively silent in the Sports Mode it does tend to get a bit noisy. 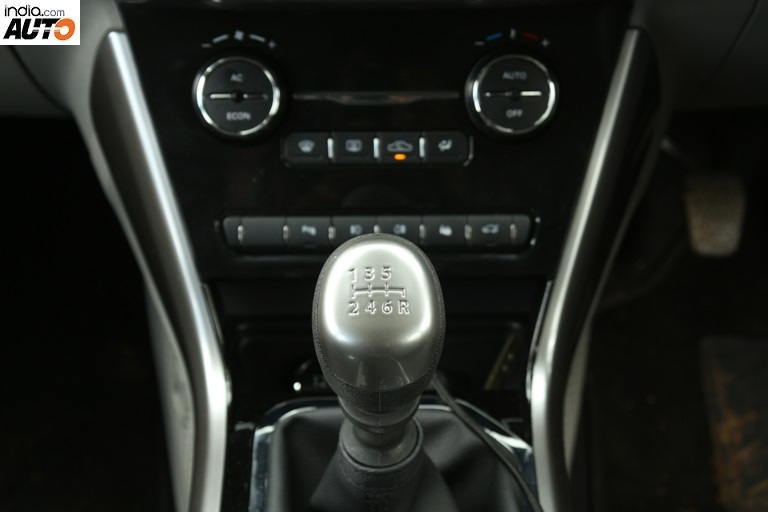 Coming to the new 6-speed manual transmission, this isn’t one of the smoothest gearboxes and does take a bit of time getting used too. The third gears tends to be a bit clunky while 5 and 6th are optimum for cruising. The steering wheel on this one is well weighted which indicates to its smooth and effective maneuverability capabilities. As for the ride, the suspension of the diesel variant is tuned in such way that it gobbles potholes and broken roads with utter ease without having to discomfort is occupants. 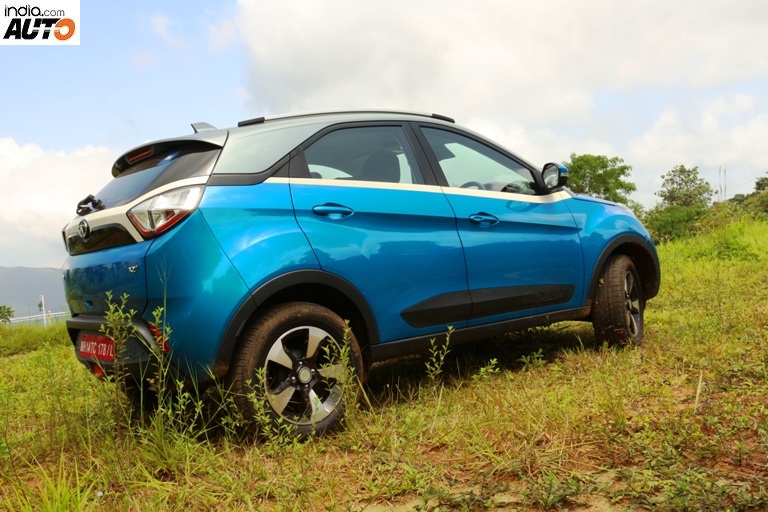 Having a tyre section of 215/60 with R16 rubber, the Nexon sticks very well to the road and offers loads of grip even while going fast around corners. There is very little amount of body roll that ensures that this compact SUV does well on our Indian road conditions. That aside the clutch too is on the lighter side from a normal diesel vehicle which is another plus point especially for those who would like driving it within the city apart from the usual highway use. 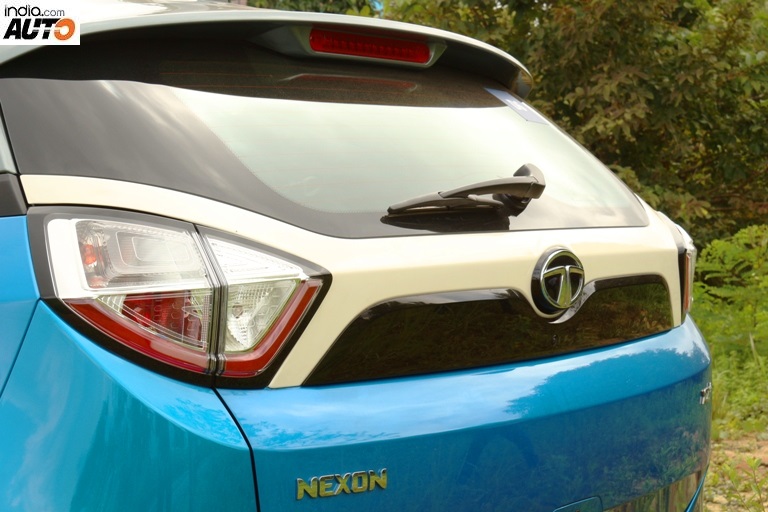 Having had a rather longer stint with the diesel, we did get to lay our hands on the petrol avtar and this what we thing off it. From just the top, this 3 cylinder petrol engine is capable of delivering its worth with relatively decent performance and refinement. It drives well and has decent amount of power for city and highway performance. 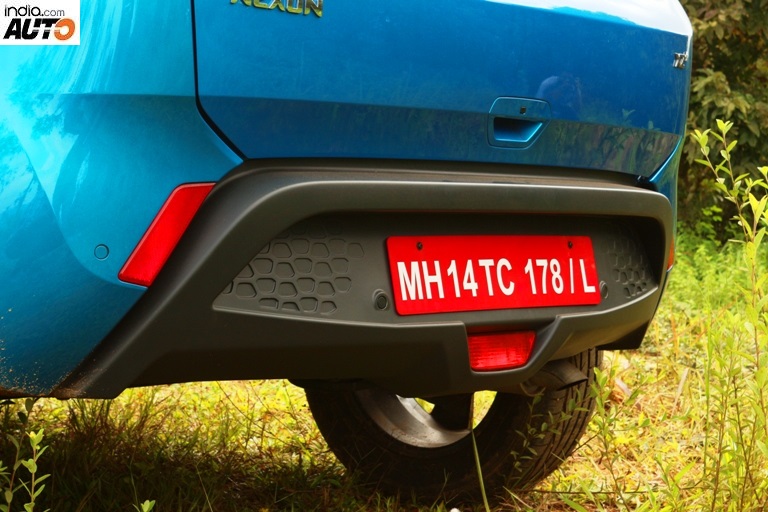 Though like the diesel, the 6-speed manual transmission here to is a bit clunky especially while engaging the 1st and the 3rd gear. The suspension too is on a stiffer side in comparison to diesel that seemed comforting espcially for the rear occupants. This experience aside, since were short on time we will be bringing for you a full fledged review of the petrol Tata Nexon on a slightly later date for which do stay tuned to our review section for the same. 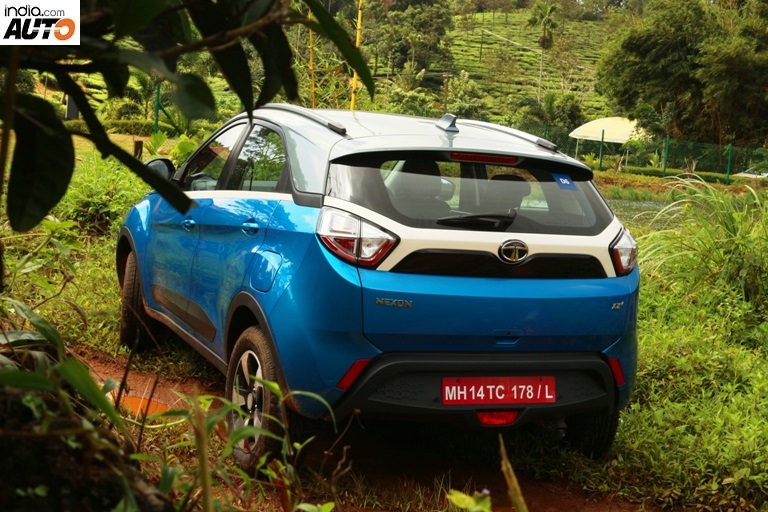 Finally to the all-important question would it be worth all the fan fair being bestowed by Tata Motors? Well the answer to that is definitely a Yes. The Tata Nexon looks like none other in a segment that has been growing sharply. It will be going up against the likes of Maruti Vitara Brezza and Ford EcoSport but then again there are many tricks up its sleeves. These are great looks, upmarket interiors with a host of utilitarian features, on-board infotainment system which comes in really handy for the user, engine & performance that could make one sit and take notice of it. Though the pricing remains to be a crucial determinant for which we would have to wait a little bit more, the Tata Nexon still remains a very attractive package towards the end of the day. Maruti and Ford better watch out, Tata Nexon is coming.