The VTEC is back! Well, just

Futuristic lines set the Honda City apart from the crowd 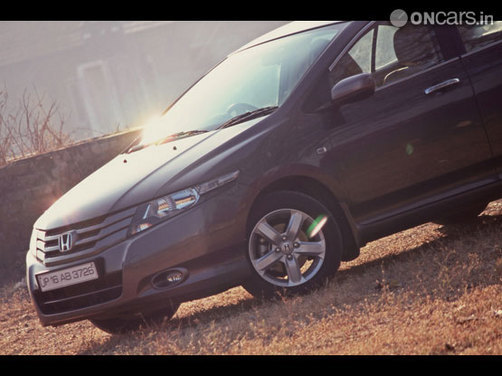 For long, the Honda City has defined the premium mid-size sedan segment, so much that it has become an aspirational car for the upper middle class. The City has also been the benchmark in its segment, the car to beat for every new entrant. Competition has tried to usurp its throne with props like value-for-money, space and even diesel powerplants but the City still remains the dreamcar for the upper middle class, a car to announce a new promotion to the world or simply that they’ve arrived in life too. It wasn’t for nothing that the current City was Indian Car of the Year for 2009. The competition now is getting dangerously close to knocking the City off its pedestal. So what does Honda do? Give it some bells and whistles. Does the recently-launched ‘Exclusive’ variant manage to put enough distance between the City and the competition?

When the City was launched in India in 2000, it had a fairly conventional three-box silhouette but appealed to enthusiasts with its sporty cues. Slap in a spoiler, alloys and you had a sporty tintop racer for the road. After a slight facelift, Honda decided to take the City to another level. The second generation disappointed fans of the first generation with its steam-iron derived styling but the car was much ahead of the competition in terms of its exterior as well as interior packaging. Honda designers had freed up a lot of space inside in spite of the compact interiors. The City found new fans, not the enthusiasts but the sensible lot. Sadly it didn’t get the VTEC engine. A year later, a streamlined facelift made the shape more acceptable and the VTEC engine made an appearance. 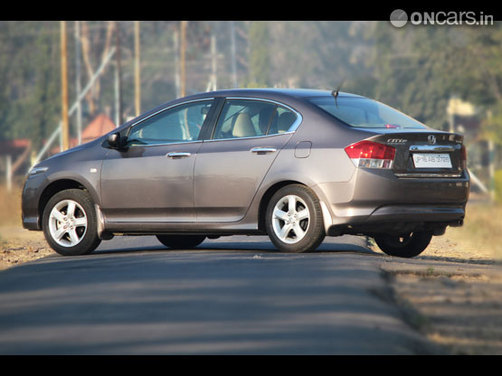 The current generation City, when announced, came as a shocker – both in terms of design and what it packed under the hood. It wowed everyone with its futuristic and sporty styling that drew inspiration from the European Civic Type R and American Civic Si. Honda calls this an ‘arrowshot’ design and the car actually looks shaped like an arrowhead when viewed from the side. The long-ish nose, a coupe-like roofline and a stubby boot gives it a distinctive stance. The futuristic approach works well for the City as everything else in competition follows a conventional three-box design. Recent updates to the exterior include the alloy wheels. The Exclusive trim is available only on the V variant and adds very little to the exterior of the car: there’s a metallic grey exterior paint called ‘Urban Titanium’ while only the eagle-eyed would notice the chrome strip on the boot and around the windows as well as body-coloured mud flaps. 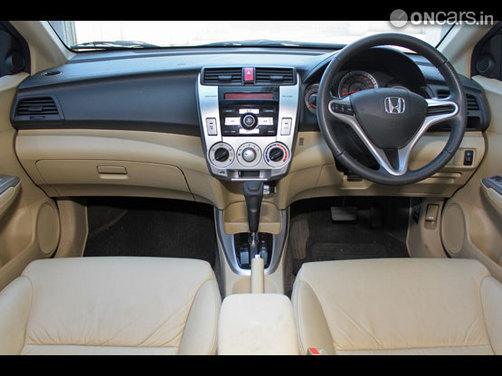 Let’s get straight to the City’s new party piece. The Exclusive edition’s interiors are decked up in leather and this makes for an upmarket cabin. The seats and steering wheel get a hiding, and if you pick the manual, the gearshift knob also gets wrapped up in leather. Other bits unique to the Exclusive are chrome scuff plates. 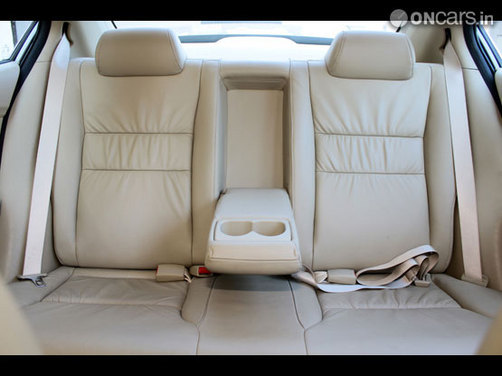 The City’s interiors are the same as before; you get a silver-finish center console, black plastic for the dashboard and beige seats. When you sit in the City, you realise that there is a price to pay for the striking exterior design: headroom is in short supply compared to the competition. Honda’s figures say that the current City is bigger in every way compared to the previous-generation City, but we still think that the older car was more practical and offered more usable space to its occupants.  Finding a driving position is relatively easy, since the driver’s seat is adjustable for height. There is no electric adjustment for the seat. However, if you’re a tall driver, you’ll find that sitting high brings your head in close proximity to the roof. 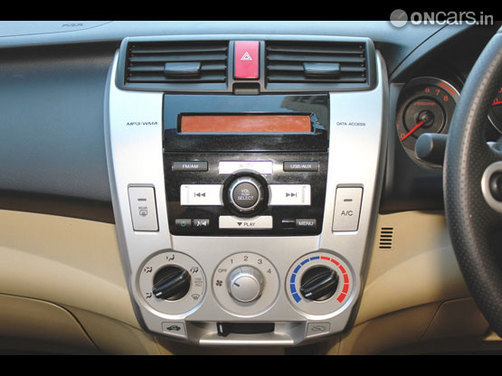 The steering wheel tilts but doesn’t telescope – something we know would have gone a long way in making tall drivers feel more comfortable by alleviating the headroom problem by putting the driver further back in the cabin. The automatic we have here has fixed paddle shifters behind the wheel to help with gearshifts and you still get the choice of an aux/USB input or a CD-playing head unit for your audio system. You can’t choose both. It also has a dead pedal to rest the left foot on, a much-appreciated addition.  Passengers have more than enough space for themselves, but the seats are very low, so old people may not like the City for the effort that is required to get in and out of the car. The boot is big enough,  but the Vento and Linea both offer more boot space in comparison. 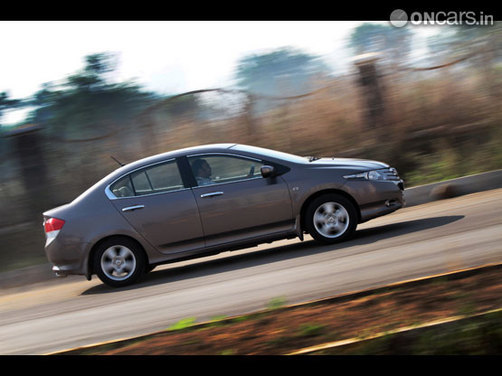 Honda’s 115PS 1.5-litre i-VTEC engine is mated to a five-speed gearbox in the City. It is the best combination offered in the price range, mostly because of the paddle shifts it offers behind the wheel – no other car in the price range offers the paddle shifts, although the VW Vento petrol and the Hyundai Verna diesel do have automatic gearboxes on offer. The City doesn’t have the Vento’s displacement advantage nor the Verna’s torquey diesel, but the gearbox makes up for it. It’s no dual-clutch and downshifts are accompanied by a little head-nodding, but the paddles make up for lost time. 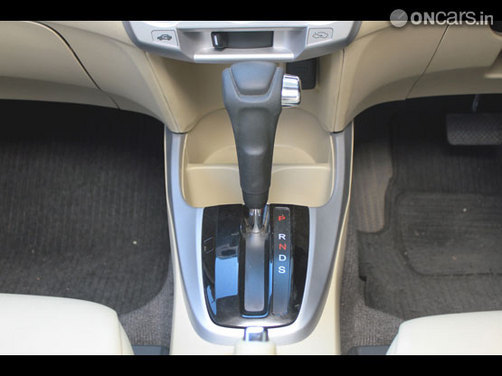 Left to its own devices, the car shifts up as early as possible and sometimes doesn’t know what to make of a stiff prod of the throttle, with annoying hunting between ratios – but left in manual mode, you discover that this is one of the few remaining automatics that does not shift up once it reaches the redline. This is a good thing because it doesn’t interrupt your rhythm on a twisty road. It is a bad thing because other automatics shift up at the redline for a very good reason – to protect themselves and prolong their life. Performance is not thrilling, but it’s the manual gearbox with its short, crisp throws we miss when  driving quickly.

Handling is predictable and hustling the City along a set of corners is fun. At the limit, under steer steps in progressively. The steering is dead accurate but is short on feel  – the Linea, Vento and especially the Fiesta in 1.6S guise all manage to offer better feel and feedback to the driver. Braking is linear and progressive, and the standard-across-the-range ABS is a welcome addition. Despite all the high-revving shenanigans, the City offers good fuel efficiency when driven sedately. 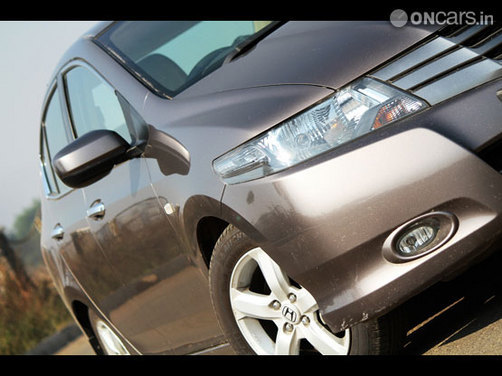 Verdict:
The City still does a lot of things extremely well – it’s frugal, comfortable and the badge will
earn you respect. The competition has caught up in many areas, though – the Linea is bigger, the Vento handles better and the Vento’s diesel makes a strong case for itself. At Rs 10.25 lakh, ex-showroom, Delhi, it is treading on Corolla Altis territory and leaves the competition almost Rs 1 lakh behind. This, then is for the City fan, or if you’re brand-loyal and want to stick to Honda.