Volkswagen India for the first time steps into the popular compact sedan segment with the Ameo. Would this Sub 4 meter sedan be able to take the German automakers fight to the competition in a fiercely competitive environment is what we are here to find out? 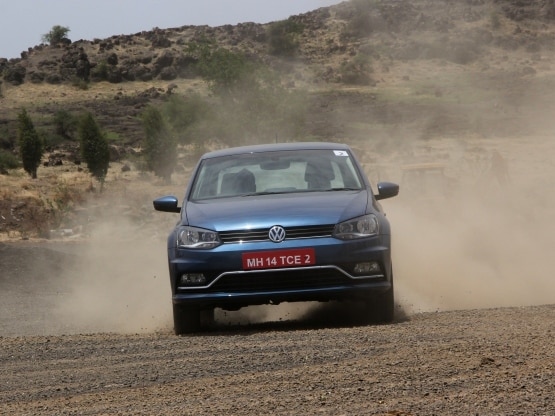 The word ‘compact’ in a country like ours has a significant implication; it is more like a trend which seems to be gaining immense traction not only for automobile maker’s indulging in production but for those who willing to consume such commodities. The more one has to offer, choices within the compact sedan segment seem to be growing larger in number by the day off which Volkswagen’s Ameo is the latest example. Coming rather late to the party (almost a two year wait for the end customer), the Ameo brings forward a compact look with an aggressive styling, a price tag that would make people think more than once and a power plant which happens to a petrol at this point with the diesel slated for a festive season launch. Also Read - Nitish Kumar Makes Covid Test Mandatory for Those Traveling To Bihar from Other States During Diwali, Chhath 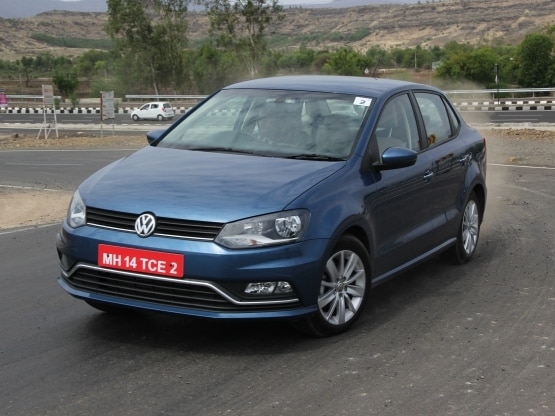 Volkswagen Ameo – Exterior
In first glance, the Volkswagen Ameo does feel familiar and that too with the current generation Polo hatchback. But before we get into those specifics, let us remind you that this compact sedan is based on PQ platform which also under pins the Polo. Therefore the design language has a lot of similarities as up front what is available is a trademarked VW grille, stretched back headlamps and a wider air dam that integrates well with the pair of fog lamps. Subtle use of chrome further helps in bringing out the design. However the key note here is that the front bumper has been revised by 35mm so as to keep a proper correlation between the front and rear profile. 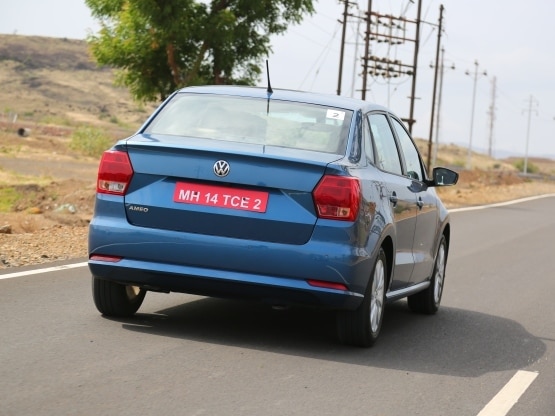 Speaking off that, towards the sides the front three quarter is the same that we have been seeing on the Polo as well as the Vento but when it comes the rear quarter is where there is a stark difference. The presence of a chopped off boot lid is what qualifies this sedan as a sub-compact sedan not to forget the front bumper which was shaved a little to do so. Plus there are 15 inch wheels on offer that offer a ten spoke alloy design further increasing its appeal.  Now for the rear itself, the wedged tailgate does look nice in fact better than most of the competition featuring elegant looking tail lights and a sharper bumper which includes indicator inserts. In the end only from a design perspective, we are not too convinced about the shape as this compact sedan does feels a bit disproportionate especially while comparing its nose to rear. 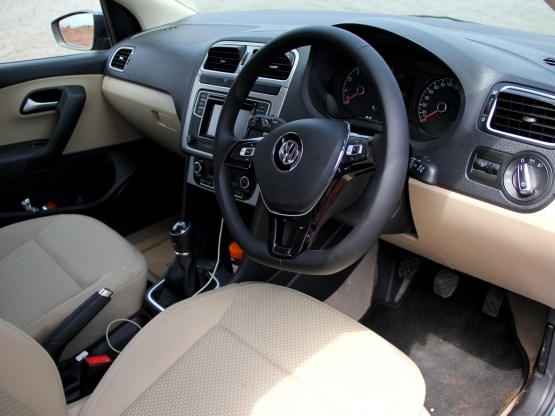 Volkswagen Ameo – Interior
The story is the same when one will take a peek into the cabin. Step inside and a dual tone interior will brighten up your eye sight. The premium quality is replicated without doubt in the Volkswagen Ameo keeping in mind is attractive price point. A three spoke flat bottom steering wheel featureing a Piano black finish which when combined with a bit of chrome gives a very premium feel. The instrument cluster remains the same as other VW siblings. Turn the attention towards the center console and a mild update comes in the form of a silver plastic housing which looks indeed sporty. The availability of a touch screen multimedia system with connectivity features like a USB port, Aux-In and Bluetooth further enhance its on-board experience. The manufacturer has thrown in a reverse camera that is non-existent in a car like the Maruti Swift Dzire. There is also automatic climate control on offer in this particular Volkswagen as is ample of storage places like cup & bottle holders, a decent size glove box and door flaps to keep things. 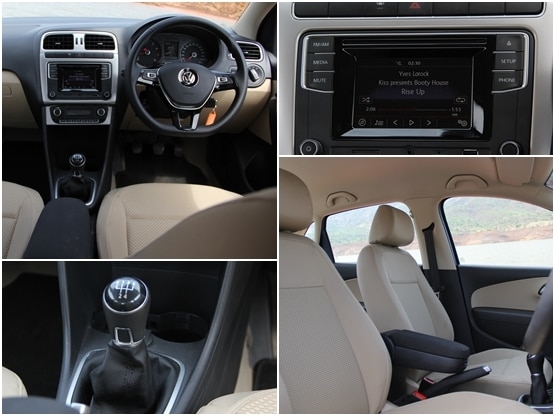 Going by its compact size (3995mm in length, 1682mm in width and 1483mm in height), this compact sedan offers comfortable seats with good amount of cushioning, under thigh and lumber support. Talking about space in particular, the front row is decent on leg, shoulder and headroom but the moment one shifts to the rear the story becomes a bit dismal. Even for a short heighted person like myself, there was very little space for the knees with the front seat pulled all the way back. Put it a bit more in front still an average person will find it a bit cramped. I feel VW could have worked on this point a bit better. Otherwise the comfort level is fairly okay in terms of cushioning and its lumber support. Unlike the front which provides a center armrest, there is no such provision made for the occupants towards the rear. With safety becoming a primary concern, Volkswagen Ameo offers Dual Airbags and ABS (Anti-Braking System) as standard fitment across all variants which is the first in this segment. With other things like ESP (Electronic Stabilization Programme) and Hill Decent features being thrown in the top end variants. One of the many considerations while purchasing a sedan of such type is its ability to store sufficient amount of luggage enough for a weekend getaway, the Ameo in this regard caters to 330 litres of boot space. 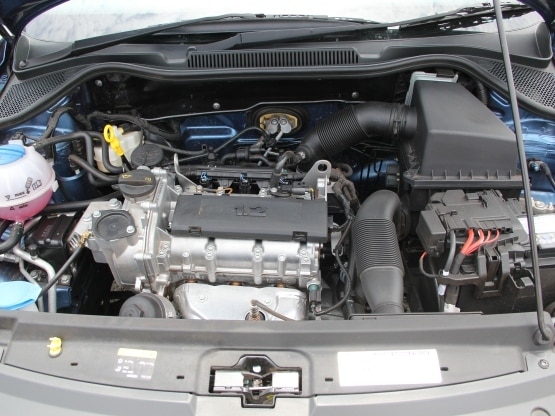 Volkswagen Ameo – Engine and performance
Normally when a manufacturer launches any vehicle into the Indian market they bring both petrol and diesel variants of the same to give the consumer a choice within that model. But to ours and your surprise, the Ameo is currently being offered only in an 1.2 litre petrol. Sources from the company claimed that the diesel (a 1.5 litre unit) should be expected around the festive season. But for now, the 1198cc power plant which is in question, produces 74 bhp of maximum power output with 110 Nm torque. Keeping its specifications aside, this unit feels a bit unrefined. One can say this because with the considerable amount of power being produced, the experience falls short due to its under powered engine. From time to time, there is a requirement of higher revs to keep the vehicle going. The lower end is totally dead while the mid-range tries to breath in life doing just about the needful. Red lining this compact sedan is also not a good idea because post 2800 rmp the engine tends to scream its heart out, sheer acceleration just exposes it excessive NVH levels. Wonder why Volkswagen did not take notice of it at the time of doing a feasibility study for the Ameo? 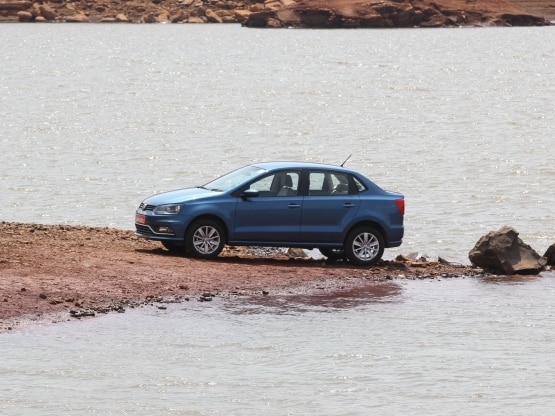 Powering its front wheel is a 5 speed manual transmission that does well to provide seamless shifts. Like all VW’s, the Ameo features a well sorted suspension which enables this compact sedan to glide over pot holes and broken roads with utter ease. As for its handling, this car does well for what it is mad
e. The MRF ZVTV with section 185/60 R15 tyres fitted here ensured high levels of grip that made driving a truly enriching experience. With these, you feel that you are always in control. To summarise this sub section in one line, the Volkswagen Ameo is an ideal fit for the City meanwhile its highway use is best for cruising. If you’re expecting a spirited performance then this one might just let you down on the highway.

Volkswagen Ameo – Verdict
Considering that it took Volkswagen two years to introduce the Ameo into in the Indian market, one was expecting a bit more in terms of design. Having a familiar face does not always please a customer and for that the company should have done a bit better. Its premium appeal is kept intact like other siblings within the product portfolio however the cabin still impresses on key features besides the fact that there is less legroom for rear occupants. Introduction of only a 1.2 litre petrol engine does restrict options for the time being but its performance is alright given its power configuration that is well suited for city use with the odd planned out station trip for the family. Putting all this into perspective as against the really attractive pricing of 5.14 lakhs (ex-showroom), Volkswagen Ameo is not a bad choice given the kind of features it has to offer as against the likes of Maruti Swift Dzire, Hyundai Xcent, Tata Zest, Ford Apire among others. In fact if we were to look back at this package as whole then for its features there is definitely a lot of value while similar looks of the Polo hatchback only points towards the cost effectiveness which Volkswagen have managed to achieve with the Ameo.