Honda is offering the new antivirus cabin air filter as a Honda Genuine accessory and an alternative to the standard Honda pollen filter.

According to the automaker, the new Honda antivirus cabin air filter’s first layer, coated with the active substance of leaf extract, inactivates allergens along with bacteria, and prevents them from being released into the cabin air. The second layer, made of activated carbon, is responsible for the adsorption of harmful acidic gases, pollutants such as PM2.5, and particulate matter. Other layers capture most viruses, ultra-fine aerosols, dust and pollen. Also Read - Top 10 Cars With Major Festive Offers: Alto, Swift, Baleno, i20, Nios, Nexon, Harrier, Scorpio, City, Kwid 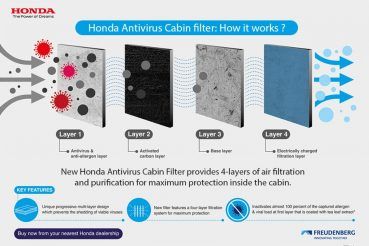