Likely to launch by next year, the 2017 KTM Duke 390 has been snapped at company’s Chakan facility with all-new 1290 SuperDuke style headlight.

As we earlier informed you that the improved KTM Duke 390 will not feature cosmetic upgrades but will also be sport mechanical changes. The 2017 KTM Duke 390 was earlier spotted while testing in Spain and yet again it has been spotted at company's Chakan plant.Also Read - Tourism Back on Track Amid Covid-19 as Sri Lanka Records Over 7,000 Foreign Visitors in October 2021

Going by the spy shots, it is can easily noticed that the model is completely overhauled with an updated designing and majorly looks like a mirror image of the KTM SuperDuke 1290. However, the front end of the model is all new but the split headlight which comes with high set LED blinker shows resemblance with SuperDuke 1290. The company has continued to the same flat handlebar and grips from the current generation Duke. Moreover, the handlebar now will be painted in black colour. 2017 KTM Duke 390 will also sport adjustable brake as well as clutch lever. Also Read - Ish Sodhi, Not Mitchell Santner, Should be in The New Zealand Playing XI: Dipak Patel 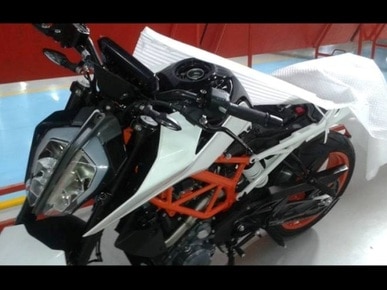 When compared to the current generation, the 2017 Duke sports bolted tank shrouds with contrasting colour, a trait observed on the biggest Duke from KTM. The new model might also get a bare sub-frame, which is already seen on the 1290 SuperDuke. The bike will continue to employ the Metzeler tyres.

As far as the mechanical front is concerned, KTM will equip an updated motor to the Duke 390 in order to comply with Euro 4 emission norms. Talking about the current generation Duke 390, it delivers 43bhp of power. However, the power figures are expected to increase with the upcoming 2017 model.

Talking about the production, the company will initiate the production of 2017 KTM Duke 390 from October 2016 and expected to reach out to the Indian market by the next year. As far as the pricing is concerned, the upcoming 2017 model is expected to be marginally higher than the current generation.