The Bajaj Pulsar RS400 is expected to be launched in the India during the festive period around Diwali. The bike will be priced around INR 1.7 lakh (ex-showroom Delhi). Also Read - Raju Srivastava Will Take a Week or Two to Recover, Continues to Remain on Life Support

The Bajaj Pulsar RS400 was revealed to bike aficionados in India during the 2014 Auto Expo. The bike took everyone by surprise and enthusiasts are eagerly waiting for Bajaj to launch the bike soon. Now, ZigWheels reports that, Bajaj will launch the Pulsar Rs400 in India in Diwali during the festive period this year. Recently, the Bajaj Pulsar CS400 was spied testing in Pune. This suggests that the Pulsar RS400 will be the second product from Bajaj that will be powered by the 373cc engine that also powers the KTM 390 Duke and the KTM RC 390. Also Read: Bajaj Pulsar CS400 launching soon; Spied testing in India Also Read - Breaking: Savarkar's Banner Torn In Karnataka's Tumakuru, Day After Violent Clash in Shivamogga 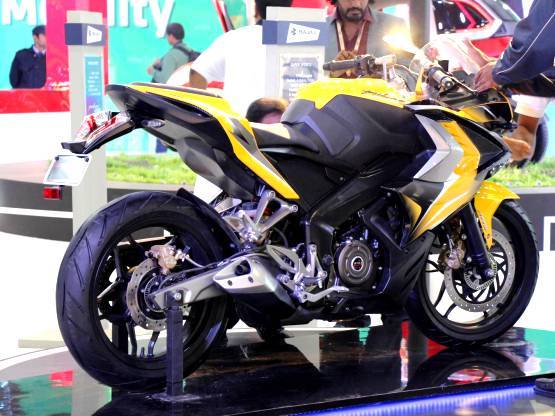 The Pulsar RS400 will be similar to the RS200 in most ways while the only difference will be in the graphics and tyres department. The RS400 will get new body graphics and decals whereas the bike will come shod with soft compound Metzeler tyres that are available on the Duke and RC 390. The bike will be powered by a 373cc single cylinder, liquid cooled engine that is expected to produce around 40bhp of power and around 32-35Nm of torque. Also, Bajaj will incorporate its patented triple spark technology to this engine to give that typical pulsar character to the bike. The Pulsar RS400 will come equipped with a 6-speed gearbox while there is no clarity whether the bike will get a slipper clutch.

The Pulsar RS400 will be underpinned by a stiffer perimeter frame that also underpins the RS200. Suspension duties are taken care of by telescopic font forks and a gas charged rear monoshock. Being a 400cc bike, braking duties on the bike will be done by dual disc brakes while we can expect the bike to get dual channel ABS as standard. Bajaj has always been known for providing better products at a very aggressive price point. Considering this, we expect the Bajaj Pulsar RS400 to be launched at a price of INR 1.7 lakh (ex-showroom Delhi). At this price point, the Pulsar RS400 will be a great value for money performance motorcycle from Bajaj.