DSK might update its entire bikes portfolio with ABS feature

Bike safety has been a hot topic for debate since the introduction of the two wheelers, features such as Anti braking system (ABS) are being introduced in many upcoming and existing bikes by two wheeler manufacturer. Reports are coming that DSK Benelli will update their entire portfolio with an ABS system. 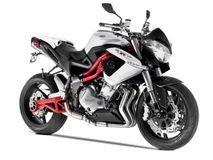 Now if reports are to be believed, this will increase the price tag of Benelli bikes, although it is still to confirmed that the company will provide ABS as an optional or will it feature it as a standard .

Currently, Benelli line-up includes TNT 300, TNT 600i, TNT 600GT, TNT 899 and TNT R, so we can expect also expect the upcoming bike from Benelli to follow such safety standard. Though, TNT 25 may not receive this feature, the bike is brought in Domestic Market as CKD unit and if it also features ABS system it might not stand a chance against its rivals like KTM Duke 200.