KTM CEO, Mr. Stefan Pierer has revealed in a recent interview that the company will slowly phase out the existing Duke & RC lineup globally and introduce a completely new lineup in 2017.

Ever since its strategic partnership with Bajaj Auto, it would be safe to say that KTM has changed the dynamics of the Indian two-wheeler market. Recently, KTM AG, CEO Stefan Pierer had revealed that KTM will phase out the existing Duke and RC lineup and will introduce a completely new series of bikes in 2017. This includes the Duke & RC 390, 200 and the 125cc bikes. The company has already revealed the 2016 model range and that includes features like ride-by-wire, cornering ABS and new side mounted exhaust. Also Read - NMDC Recruitment Through GATE 2021: Apply for 67 Graduate Engineers Posts Via nmdc.co.in, Details Here 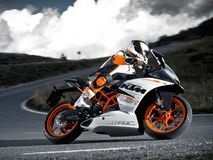 While the 2016 models were revealed at the 2015 EICMA show in Milan, the bikes were launched only in the Europe and few other markets. KTM's Indian models didn't receive any significant updates in 2016 apart from a few cosmetic changes and addition of Slipper clutch into the KTM RC390. KTM has already started working on the next generation models and a test of the 2017 KTM 390 Duke was recently spotted testing in Spain. The new models are expected to be showcased at the 2016 EICMA show and will make their global debut in 2017. Also Read - Shaza Morani-Priyaank Sharma's Mumbai Wedding on March 5 Postponed, Here’s Why

The 2017 KTM 390 Duke's engine is expected to feature a secondary balancer shaft that helps in smooth engine performance while it provides the engune with calmness of a twin cylinder engine. Owing to increasing competition in the performance segment, we can also expect the KTM to completely discontinue the 200 series and replace it with the 250 Duke thats sold in Japan and other southeast Asian markets. We expect KTM to launch the next generation model in India by mid 2017.