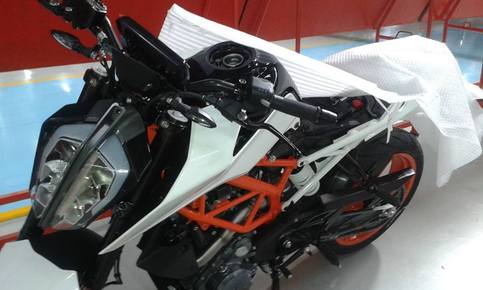 Also Read - Meet Teddy Bear Mama, The Woman Who Has a Collection of Over 20,000 Teddy Bears

The 2017 model of KTM 390 Duke that has been a topic of discussion among us petrolheads for the last few months is finally making its appearance in November. The motorcycle is slated to be introduced at the 74th EICMA in Milan, Italy. The first images of the all-new KTM 390 Duke started surfacing over the internet last month when it was spotted in a production ready state at Bajaj’s manufacturing facility in Chakan, Pune. Also Read: 2017 KTM Duke 390 production model spotted undisguised  Also Read - Avian Influenza Outbreak Confirmed in 14 States, Says Govt

Talking of domestic launch, some reports suggest that the upcoming motorcycle will make its entry to our shores in the first half of next year. Recently, the KTM 390 Duke got rendered by a designer of Italy and it highly resembles the top of the line KTM 1290 Superduke. The motorcycle seen in the spy shots gets a split headlamp section along with high mounted LED blinkers. Just like the current model, the upcoming KTM 390 Duke will sit on a trellis frame and will come additionally with sharp tank extensions for appealing visuals. Also Read: 2017 KTM 390 Duke coming soon: Rendered Also Read - Haryana Shocker: Man Arrested For Raping Daughter For 7 Years, Forcing Her to Abort Pregnancy

As far as mechanicals goes, the 2017 KTM 390 Duke will come powered by the same 373cc engine that runs the existing model. However, the company might tune the mill for a bump in the power and performance figures. The existing engine comes mated to a six-speed gearbox and develops a maximum power of 43 bhp with a peak torque of 35 Nm. Coming to the most important factor i.e. price, the upcoming KTM 390 Duke will be sold at a price slightly higher than the present model which currently retails at INR 1.95 lakh (ex-showroom, Delhi). Once launched, the bike will take on the likes of upcoming BMW G310R and Mahindra Mojo.