Sarath Kumar, a 23-year-old Indian rider is opening a new chapter for his racing career with a SuperSports 600cc debut at Round 2 of the forthcoming 2016 FIM Asia Road Racing Championship. This 2016 championship is slotted to be held on May 7 – May 8, 2016 at Chang International Circuit in Thailand wherein Sarath will be seen running alongside two Japanese leading riders – Tomoyoshi Koyama and Taiga Hada. His riding skills and passion derived him to achieve 9th rank in the year 2014 but later slipped to 13th position. Moreover, Sarath became the foremost Indian rider to be accepted in Honda-driven Asia Dream Cup. Also Read - PUBG New State Likely to be Released in September, Pre-registration to Begin Next Month | Details Here 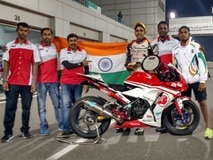 Sarath commented that, “This is a perfect time for me to move from 250 class to the 600 class and I am so happy that I will be representing India in ARRC SS600. I have been riding the smaller bikes for over 8 years and because of my physic I had to move up the cc class but I did not expect the opportunity to come so soon that to at such a high level of competition.” Also Read - Monsoon Mayhem: Rains Claim Over 130 Lives in Maharashtra, 'Red Alert' For Karnataka on Sunday | 10 Points

He further mentioned that, “ARRC SS600 is one of the toughest grid in the world and I want to learn a lot this year before I start thinking about results.  Riding with teammates like Koyoma will be a great learning opportunity for me and I hope I can get adjusted with the motorcycle fast. I really want to thank Honda Motorcycles & Scooters India, HM Japan our sponsors Mr. John Sudheer, WOW Digit Company and Mr. Ramji Govindarajan, Ten10 Racing who came forward to support the entire team for the season”.

The upcoming championship is basically a mediator development programme intended as a bridge between the national championships and the regional as well as international stages. This sponsored programme has emerged as a popular opportunity among the youngsters. Within the period of 5 years, the Asia Dream Cup had achieved fabulous success with its marks now looking towards the world.