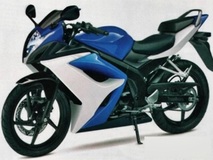 In order to capture 250cc market, the renowned two-wheeler manufacturers have launched their 250cc bikes. Though Suzuki has not given any officially conformation on the new Gixxer 250cc bike, but with increase in demand in this compact sports bike segment it is hard for Suzuki to leave this segment untouched. The forthcoming 250cc motorcycle will probably be called GSX-250. According to some reports, the new Gixxer 250 will be powered by a single-cylinder 250cc engine. Being a single cylinder will keep the manufacturing cost low and thereafter the pricing can be very competitive. The new GSX 250 will be mated to a 6-speed transmission while power output is expected to be around 30 – 32 bhp. It is expected that the styling of the new 250cc motorcycle will be based on Suzuki Gixxer 155 but with much bulky look.
Suzuki will most likely showcase its upcoming GSX-250 at Auto-Expo 2016 February, and launch can be expected in second quarter of 2016. Being a single cylinder we expect it’s pricing to be INR 1, 80,000 – INR 2, 00,000. At this price it will compete against Honda CBR 250, Kawasaki Ninja 300 and upcoming Yamaha R3. Also Read - Maruti drives in all-new WagonR priced between Rs 4.19 lakh and Rs 5.69 lakh