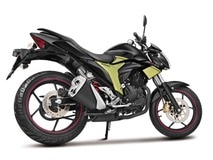 Suzuki Motorcycle India has launched the Gixxer rear disc brake variant in the Indian two wheeler market at INR 79,726 (ex-showroom, Delhi). The bike was unveiled at the 2016 Delhi Auto Expo. This is the first update the Gixxer naked bike received after a year and a half since the bike has been on sale in India. Except for the new disc brake, the mechanics of the bike remains unchanged. Also read: Suzuki Gixxer launch live updates: Get Suzuki Gixxer Price in India, Features and Specifications Also Read - Millions of Phone Numbers of Clubhouse Users 'Up For Sale' on Dark Web

The 2016 Suzuki Gixxer rear disc brake variant will lock horns against the Honda CB Hornet 160R, which has received an excellent response from buyers in India. With the disc variant, the company aims to further improve its sales in the highly competitive premium 150cc segment. The Gixxer was offered only with a front disc and a rear drum brake mechanism. Also Read - Monsoon Mayhem: Rains Claim Over 130 Lives in Maharashtra, 'Red Alert' For Karnataka on Sunday | 10 Points

Along with new disc, the bike also gets new green and black dual paint scheme. Powering the bike is the same 154.9cc single-cylinder air-cooled engine paired to a five-speed transmission. This engine is capable of producing 14.5bhp of top power output at 8,000rpm along with 14Nm of torque at 6000rpm.
Suzuki India will also introduce the rear disc brake variant of the Gixxer SF faired motorcycle, but on later stage. The vehicle is also powered by the same 154.9cc single-cylinder engine with fuel injection technology. Also read: Suzuki Gixxer to get a new variant today