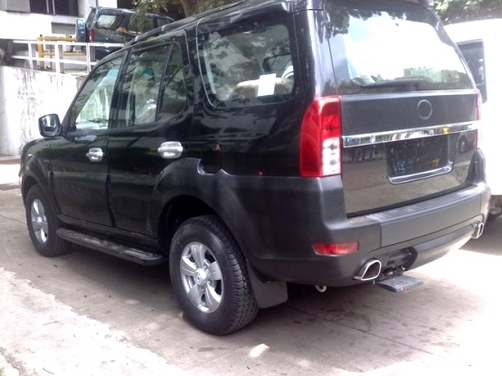 Losing their cover on Facebook seems to have become the trend for thenew Indian SUVs that expected to launch this year. After the upcoming Mahindra World SUV, the W201, was unmasked on the Facebook a few days back, it is now the turn of the Tata Safari Merlin to show its naked butt. A Facebook user managed to snap the new Tata Safari Merlin completely undisguised at what looks like some sort of a Tata facility. The Safari Merlin has traded in most of its curves for a boxy, Land Rover-ish look. However, what is sorely missed and makes the Safari Merlin look incomplete is the absence of the spare wheel on the fifth door! The spare wheel now finds its place below the boot like most modern SUVs/MUVs. Also Read - Video : Drive to Discover S4: The Honda Amaze travels from Visakhapatnam to Kolkata

As has been reported earlier, the new Tata Safari Merlin took birth in 2007 as an eighteen-month project called the ‘Safari Eighteen’. However, with a wealth of knowledge coming from Tata’s Jaguar-Land Rover acquisition and the news of arch rival Mahindra’s W201 SUV floating around, the Safari Merlin got delayed many times over with new updates added to the development list every now and then. The Safari Merlin is now expected to absorb a lot of features and creature comforts from the Aria – from the plush interiors and comfortable seating options to the cruise control, revised 4×4 and a new 2.2-liter DICOR engine. The engine will get the lightened, dual-mass flywheel from Aria as well as new, low-friction bearings.

Tata is also testing a 3.0-litre diesel V6 engine in the new Safari Merlin but it will not make it into production anytime soon. Expect the Tata Safari Merlin to make an entry onto the scene during the festive season, unless Tata wants to hold it back for the 2012 Auto Expo.