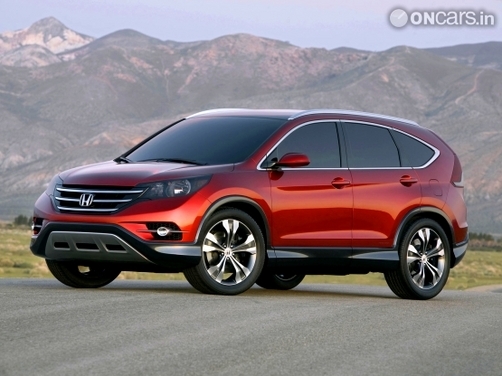 The all new 2012 Honda CR-V has been caught by spy photographers quite a few times in the past few months. It has led to a lot of speculations on the way the new CR-V will look and the features it could boast of. So to put the speculations to rest, to an extent, Honda has released an official image of the so-called CR-V Concept. As is the case with most Honda cars launched recently, this concept is more of a pre-production preview than a design study.  Also Read - Audi releases prices for the A3 sedan in US

The solitary image released so far only shows the front end of the new CR-V. However, looking at the numerous spy shots which we saw earlier, it is pretty evident that the new CR-V gets a Volvo XC60-inspired bloated tailgate. However, the bulge will only provide more luggage space and won’t accommodate a third-row of seats.

The 2012 Honda CR-V will be launched in Europe by early 2012, after which the imports of this vehicle to India will begin. So expect the 2012 CR-V / Concept to be shown at the 2012 Auto Expo with the launch on the new vehicle happening in late 2012.