Mahindra is planning to launch the updated Mahindra Bolero SUV in the Indian car market in near future. 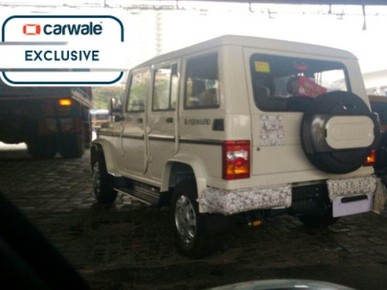 We informed you earlier that Mahindra is working on a next generation Bolero SUV which is expected to be launched in 2018-19. The next generation model will take at least 2-3 years, and to keep the Bolero nameplate popular, Mahindra is all set to give a mid-life makeover to the SUV in India.  Also Read - IPL 2020 Points Table Latest Update After CSK vs RR, Match 37: Rajasthan Royals Beat Chennai Super Kings to Rise to 5th Spot; KL Rahul And Kagiso Rabada Lead Orange Cap, Purple Cap Battle Respectively

The Mahindra Bolero facelift has been spotted testing for the first time (Courtesy CarWale.com), indicating a near launch. Going by the spyshot, it is visible that the vehicle gets a smaller tailgate handle, amber-coloured tail lamps and mildly revised bumper. The front fascia is yet to be photographed, but we expect the SUV to get an updated grille, headlamps and bumper. Inside the cabin, the SUV is likely to get new upholstery for seats, new feature upgrades and improved dashboard. Also read: Tata is working on Q5 SUV based on Land Rover Discovery Platform

If media reports are to be believed, Mahindra is working on a sub-4 metre Mahindra Bolero, codenamed U108. The sub-4 metre SUV will be the result of an extra cess on large SUVs and ban on diesel engine with displacement over 2000cc. The sub-4 metre model will make Bolero affordable for buyers. Mechanically, the 2016 Bolero is expected to remain unchanged. Under the bonnet is a 2.5-litre mHawk m2DiCR engine that is capable of producing 63bhp of power. Power is transmitted to rear wheels via a five-speed manual gearbox. Also Read - FCC vs HCC Dream11 Team Prediction ECS T10 - Barcelona 2020: Captain, Vice-captain, Fantasy Playing Tips And Probable XIs For Today's Fateh CC vs Hawks CC T10 Match at Montjuic Ground, Barcelona 12.30 PM IST Tuesday October 20