The new Mahindra XUV500 2018 facelift will get redesigned front and rear profile and a powerful diesel engine.

Mahindra has been continuously testing the new Mahindra XUV500 2018 facelift in India. The car is expected to be showcased at the Auto Expo 2018 and should be launched by mid next year. Ahead of its launch in India, the 2018 Mahindra XUV500 has been spied testing, which partially reveals its front design and new headlamps assembly. That said, the overall design silhouette of the SUV will remain largely similar to the current-generation model. Also Read: 2018 Mahindra XUV500 Spotted Testing Again; India Debut Likely Next Year at Auto Expo 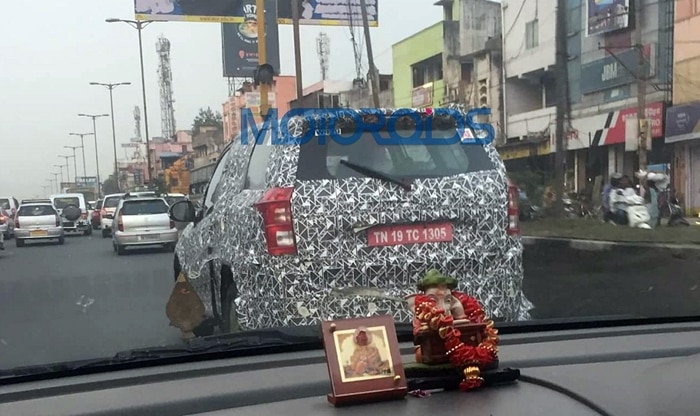 According to the spy images, the Mahindra XUV500 facelift comes equipped with new double barrel projector headlamps that have been done away with the S-shaped LED daytime running lights. However, previous test mules came with the same headlamps that are available on the current model. The facelift model will also get a new grille with multiple horizontal slats. The XUV500 facelift is also expected to get redesigned rear profile and new alloy wheels. Read More: Mahindra XUV500 Petrol AT Variant Launched in India; Priced at INR 15.49 Lakh Also Read - Mahindra Raises Vehicle Prices, including Thar's, From Today by Up to Rs 40,000

The Mahindra XUV500 facelift is expected to get an updated 2.2-litre mHawk diesel engine that will produce 170 BHP of maximum power and around 400 Nm of peak torque. Currently, this engine produces 138 BHP of power and 330 Nm of peak torque. Transmission options will include the same 6-speed manual and 6-speed automatic gearbox options. Mahindra recently launched the petrol variant that is powered by a 2.2-litre mHawk petrol engine producing 140 BHP of power and 320 Nm of torque, mated to a 6-speed AT. Also Read - Coronavirus Lockdown Impact? Nissan, Datsun Cars to Cost 5% More From Next Year