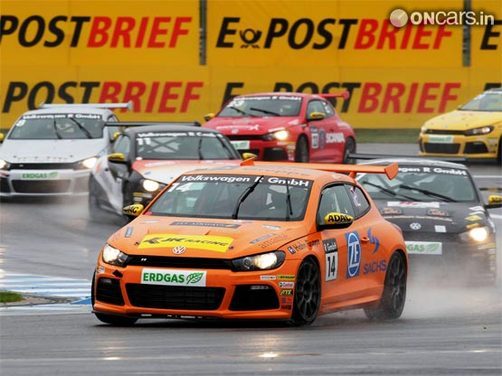 Aditya Patel from Chennai won his first race in the Scirocco R Cup starting from the pole position at Oschersleben, Germany. Although Patel has made a consistent appearance on the podium this year, this victory now takes him within striking distance of a top three finish in the championship with only one round remaining. Also Read - Coronavirus: Angela Merkel Tests Negative, To Undergo Further Checks

The Chennai lad had a disappointing qualifying and first race on Saturday, as he started seventh on the grid and lost another position to finish eighth in the race. However, this worked in Aditya’s favour, as the reverse grid system for top eight cars put him on pole position for the second race. After an initial exchange of place with Lloyd, Aditya managed to regain the lead by the end of the first lap in excessively wet conditions. However with four laps to go Lloyd and Ola Nillson managed to pass him again, but in the heat of battle, made contact with each other once again handing over the lead and the win to Aditya in extremely testing conditions. Also Read - COVID-19: Angela Merkel Goes For Self-quarantine After Meeting Virus-infected Doctor