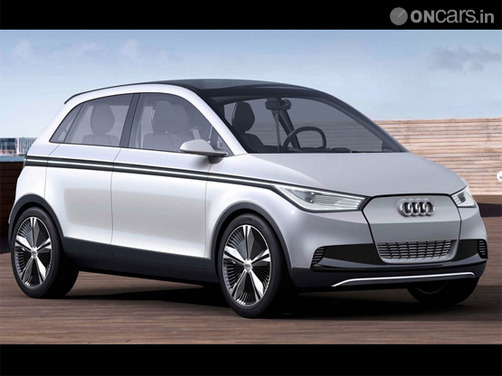 Audi has released images of the A2 concept, ahead of the electric city car’s debut at the Frankfurt motor-show next week.
Audi A2 concept is powered by 115PS (kW)/270Nm electric motor, which drives the front wheels through single-speed transmission. Lithium-ion battery pack should provide this concept with a driving range of 200kms and full recharge should take 4 hours. Extensive use of carbon fiber and aluminium has kept the weight down to 1150kgs with acceleration from 0 -100 kph under 10 seconds.  Also Read - Bundesliga: Jadon Sancho, Erling Haaland Score as Dortmund Wallop Frankfurt 4-0

The design is based on the current production range of Audi with LEDs running along the flanks of A2. They are a new technology that Audi calls ‘matrix beam’ – this allows the same LED array to function as daytime running lamp, low beam headlamp and high beam headlamps also. The red stripe that runs along the side of the car is not just a design element, it is also the car’s ‘remote locking’ feature, and it allows the car to be unlocked with the right gesture. It is also an indicator when the car is in motion.  Also Read - Owning a New Car Can Boost Your Sex Life: Study

The interior controls eschew buttons for touch-screens, both on the steering wheel and the centre console. We're not sure that all the features of the concept will make it into production, but it certainly shows off one way Audi aims to cut its fleet emissions to keep within the specified EU limits.