Bajaj Qute Car: Bajaj Auto plans to revolutionize urban transportation with the launch of Bajaj Qute, which is a four-wheeled alternative to replace auto rickshaws.

Bajaj Auto has been a trendsetter in the Indian Automotive Industry, especially the two-wheeler segment, by launching revolutionary technologically advanced products in the Indian market. Another such example of this testimony is the upcoming Bajaj Qute ‘small car’. Bajaj plans to revolutionize urban transportation by launching the Bajaj Qute, which is a much safer four-wheeled alternative to auto rickshaws, according to the company. However, the company is embroiled in a launch controversy related to the Qute, which has quite a few PILs filed against it in various states that restrict its launch in the country. Here is everything you need to know about the Bajaj Qute’s launch controversies, expected price, specifications and launch date. Also Read: Bajaj Qute Car India Launch Likely by End 2017; Price, Engine & Specifications Also Read - Parle & Bajaj Refuse to Advertise on News Channels Carrying 'Toxic Content', Twitter Says 'Well Done'

Bajaj Qute PILs & India Launch Issues – The Bajaj Qute quadricycle is already on sale in 16 various international markets, however, it is yet to be launched in India. Various PILs (Public Interest Litigations) are filed against the Qute in multiple states that restrict its commercial launch in India. All these cases have been clubbed together and will be heard in the Supreme Court with the next hearing on August 5, 2017. Also Read - Uber, Bajaj to Install COVID-19 Protective Sheet Behind Driver Seat in 1 Lakh Autos 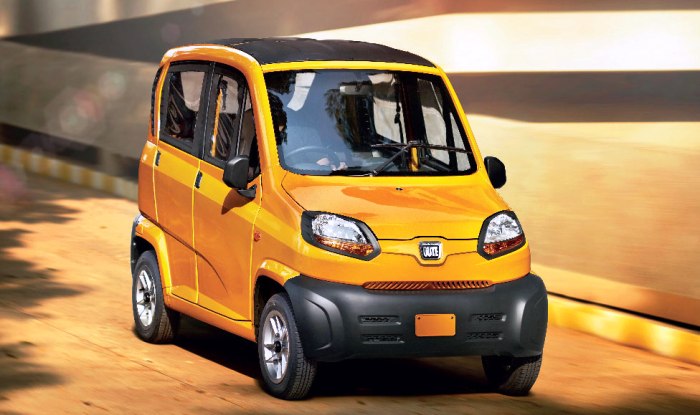 Bajaj Qute Dimensions  As far as dimensions are concerned, the Bajaj Qute car will measure at 2752 mm in length, 1652 mm in height and 1312 mm in width while the vehicle gets a wheelbase of 1925 mm. The quadricycle gets a turning circle radius of 3.5 meters and has a passenger capacity of 4 people (driver + three passengers).

Bajaj Qute Expected Price  The Bajaj Qute is a one-of-a-kind vehicle to be launched in its segment. The small car is priced at $2,000 (INR 1.28 lakh) in the international markets, but we expect the Bajaj Qute to launch in India at a price of around INR 1.2 lakh (ex-showroom), considering the fact that the quadricycle is being manufactured in India. Also Read: New Bajaj Dominar, Pulsar & Avenger models to launch in India by December 2017

Bajaj Qute Launch Date  According to media reports, the Bajaj Qute is expected to launch soon in India. Rajiv Bajaj, Managing Director – Bajaj Auto, said, Based on my interaction with the people in power (sic) I have reason to believe that within the next few months we may get permission to introduce this vehicle in this market.”