The Bajaj Qute is touted to be a revolutionary four-wheel alternative for urban transportation providing passenger and road safety, according to Bajaj Auto.

Bajaj Auto is foraying into the four-wheeler market as the Pune based bike manufacturer is likely to launch its Bajaj Qute small car in India. Media speculations suggest that the company is optimistic Bajaj Auto will be allowed to launch the Qute quadricycle in India. Launched in various international markets, the Bajaj Qute is a four-wheeled urban transportation vehicle that has been embroiled in various PILs, relating to passenger and road safety, which has restricted Bajaj Auto to launch the ‘small car’ in the country. That said, the Bajaj Qute is now expected to be launched in India this year. Priced in the international markets at $2,000 (INR 1.28 lakh ), the locally manufactured Bajaj Qute is expected to be priced around INR 1 lakh to INR 1.2 lakh (ex-showroom). Also Read: Bajaj Qute Car: PILs, India Launch Controversy & Expected Price – All You Need to Know Also Read - Parle & Bajaj Refuse to Advertise on News Channels Carrying 'Toxic Content', Twitter Says 'Well Done'

Speaking to Money Control, Rajiv Bajaj, Chairman & Managing Director – Bajaj Auto, said, “Based on my interaction with the people in power (sic) I have reason to believe that within the next few months we may get permission to introduce this vehicle in this market,” added Bajaj. He reiterated that the Qute has received positive response from various international markets, where the quadricycle is on sale. He said, “The Qute has been welcomed across continents Europe, Asia, Latin America and Africa,” said Bajaj. Read More: Bajaj Auto discontinues twilight plum colour of Dominar 400; Dealers refuse to accept bookings Also Read - Uber, Bajaj to Install COVID-19 Protective Sheet Behind Driver Seat in 1 Lakh Autos 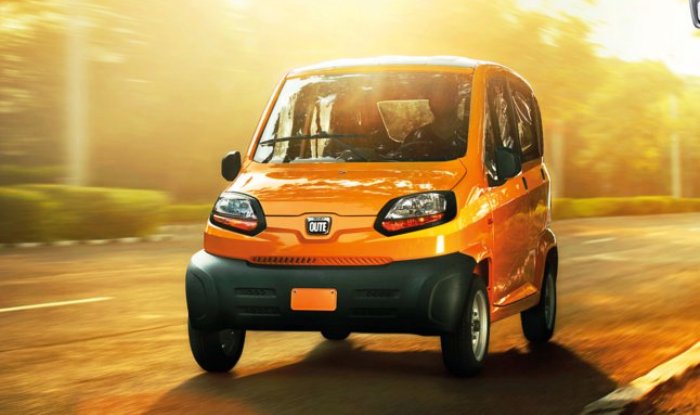 The Bajaj Qute is powered by a 216.6 cc single-cylinder, fuel-injected, water-cooled, Digital Tri-Spark ignition, 4-valve engine petrol engine that produces 13 BHP of maximum power and 20 Nm of peak torque. This engine comes mated to a 5-speed sequential gearbox, while the quadricycle has a maximum speed of 70 kmph. The vehicle measures at 2752 mm in length, 1312 mm in width, 1652 mm in height and has a wheelbase of 1925 mm. The Qute gets a turning circle radius of 3.5 meters and passenger capacity of 4 people. Also Read: New Bajaj Dominar, Pulsar & Avenger models to launch in India by December 2017 Also Read - 'Instead of COVID-19, India Flattened GDP Curve,' Bajaj MD Criticises Lockdown Measures, Calls it 'Draconian'

Speaking about the various litigations and India launch hurdles, Rajiv Bajaj said, “It is well known that the only country where the Qute is not permitted is our country (and it is) only because of competition. They have used all kinds of nefarious techniques to create problems through political circles and through courts. I will say this very candidly that they have stooped to levels that we thought they never will. (But) If it means we have to live without one country (then) we will live without one country.”