The Bajaj Qute is a quadricycle from Bajaj Auto that is targeted at revolutionizing public transportation in India.

Earlier this month, we reported that Bajaj Auto might finally launch its ambitious small car  the Bajaj Qute  in India. While we are yet to receive any official details on the quadricycle, we have spied the Bajaj Qute while on test on the Mumbai Pune highway. Recently, the Bajaj Qute was in news as Rajiv Bajaj suggests that the company may get permission to launch the vehicle in India. That said, Bajaj Auto has been embroiled in a quite a few court litigations relating to the launch of the Qute quadricycle. Various PILs have been filed against the Qute that restricts the small cars commercial launch in India. Also Read: Bajaj Qute Car: PILs, India Launch Controversy & Expected Price – All You Need to Know Also Read - Parle & Bajaj Refuse to Advertise on News Channels Carrying 'Toxic Content', Twitter Says 'Well Done' 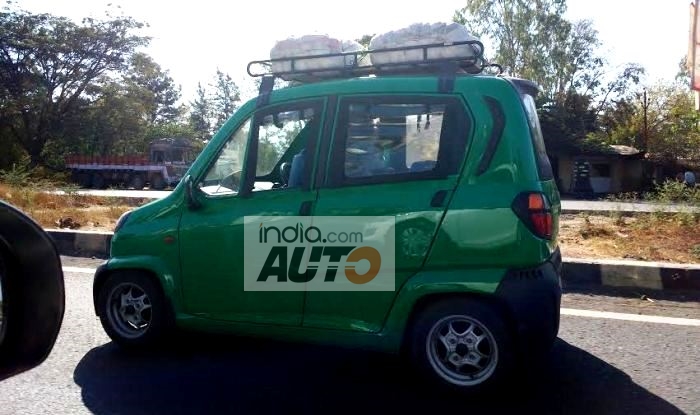 The Bajaj Qute is powered by a 216.6 cc single-cylinder, fuel-injected, Digital Tri-Spark ignition, 4-valve petrol engine that is tuned to produce a maximum power of 13 BHP while developing 20 Nm of peak torque. This motor comes mated to a 5-speed sequential gearbox, which propels the Qute to a top speed of 70 Kmph. We expect Bajaj to launch the Qute in India by the end of this year or early next year. Read More: Bajaj Qute Car Price in India, Launch Date & Engine Specifications Also Read - Uber, Bajaj to Install COVID-19 Protective Sheet Behind Driver Seat in 1 Lakh Autos

That said, the Bajaj Qute measures at 2752 mm in length and 1652 mm in height while the car gets a width of 1312 mm. Wheelbase of the car measures at 1925 mm while the quadricycle gets a turning circle radius of 3.5 meters along with a total passenger capacity of 4 people (driver + three passengers). The Qute is currently on sale in some international markets, priced at INR $2,000 (INR 1.28 lakh). Since the quadricycle is manufactured locally in India, we can expect Bajaj Auto to launch the Qute in India at INR 1.2 lakh (ex-showroom). Also Read - Bajaj Auto Commences Reopening of Dealerships Across India