Bentley Bentayga is the world's most expensive, luxurious and the most powerful SUV; powered by a 600bhp, twin-turbocharged 6.0L W12 engine. 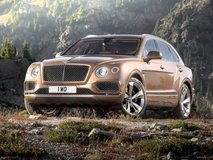 Unveiled at the 2015 Frankfurt Motor Show in September, the Bentley Bentayga SUV will be launched in the Indian car market on April 22, 2016. It is claimed to be the fastest, most powerful and most luxurious SUV in the world. Also See- Bentley Cars in India Also Read - VIDEO: When Rahul Chahar Gave Wanindu Hasaranga a Fiery Send-Off!

The Bentley Bentayga design inspiration comes from the Continental GT and Flying Spur luxury cars. It comes equipped with LED headlamps, muscular haunches, roof rails, sloping rear window and uniquely designed tailgate. The cabin is ultra-luxury and comes with the detailing in metal, wood and leather. Also Read - 'We Purple You' Trends After BTS' V aka Taehyung Reminds ARMY of How Much He Loves Them

Powering the Bentayga is a twin-turbocharged 6.0-litre W12 engine that is capable of producing 600bhp of power and a peak torque of 900Nm. The SUV accelerates to 100kmph from zero in just 4.2 seconds before hitting a top speed of 300kmph. Power will be transmitted to all-4 wheels of the SUV via an eight-speed automatic gearbox. Also Read- Bentley Bentayga FIrst Edition

The world's most luxurious SUV is already on sale in select international markets. In China, the SUV is priced at INR 4.2 crore (3.98 million yuan) and it is also the most expensive car in the Chinese market. It is quite early to comment on the exact pricing of the Bentley Bentayga in India, but we expect it to be the most expensive SUV in the country.