American bike maker - Harley Davidson through its dealer counterpart 'Nine Bridges' has announced the delivery of six units of specially customized Street 750 motorcycles to the Gujarat Police department. This is in fact the first time that a state government has gone in for such kind of a purchase, until now our city roads were used to brands like Bajaj Pulsars, Hero's, Bullets etc which were being used by the police across the country. 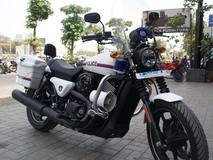 Having mentioned this, Harley-Davidson Street 750's so procured by Gujarat Police Department would be used for quick response action. Their utilization would also include the escorting of senior ministers and visiting dignitaries which could include Prime Minister Narendra Modi. They would also be used at the time of natural disaster as a part of immediate response team.   Also Read - Harley-Davidson Street Rod 750 debuts on website; gets new features & updated engine 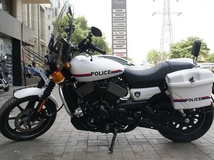 Speaking on the occasion, Pranav Nanda – Dealer Principal, Nine Bridges Harley – Davidson said, “We are proud to add these Harley-Davidson Street 750 motorcycles to the Gujarat Police arsenal. The Street 750 not only addresses the police department’s need of a performance motorcycle in challenging situations but also provides great confidence and manoeuvrability in urban conditions”. 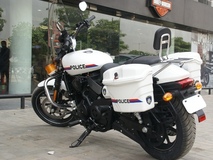 Manufactured in India, Harley-Davidson Street 750 features V-Twin engine which has been developed especially keeping Indian city riding condition in mind. It is liquid-cooled unit provides ideal performance be it in the city as well as on the highway. Mated to a 6-speed transmission, the Harley Davidson Street 750 has a good response to the throttle in Indian conditions.