Datsun redi Go small car will be powered by a 0.8-litre petrol engine coupled to a five-speed manual gearbox. 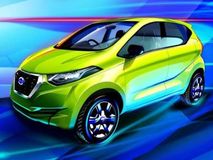 After releasing multiple teasers, Datsun India has released a design sketch of the highly awaited redi Go hatchback. The new sketch reveals the final design of the small car, which looks largely identical to the concept showcased in 2014 Delhi Auto Expo. Scheduled to make its global debut on April 14 in India, the Datsun redi-Go will directly rival against the Maruti Alto 800.  Also Read - Horoscope Today, July 31, Saturday: Gemini Can Expect a Positive News, Romantic Day For Libra

Like the Renault Kwid, the redi-Go is based on the Renault-Nissan Alliance's CMF-A modular platform. It comes with a crossover-ish styling and will be offered with a 2+3 seating configuration. The concept showcased in 2014 had a wheelbase of 2350mm, which is around 100mm lesser than the Go and Go+. Going by the sketch, it is visible that the redi Go comes with short overhangs and crossover-style raised body. On sides, there are two prominent character lines that run across the length of the car. The headlamps features narrow daytime running lamps while the grille is the same offered in the Go and Go+. The fully integrated bumpers are complemented by chunky wheel arches, which have been fitted to stylish 6-spoke alloy wheels. The interiors of the small car are expected to be shared with the Renault Kwid small car.  Also Read- Datsun Redi-Go Global Unveil Live Updates: Get Expected Price, Features & Specification of Redi-Go hatchback Also Read - Delhi's Iconic Khan Chacha Restaurant's License Cancelled. Details Here

The Datsun redi Go will be powered by an 800cc, 3-cylinder petrol engine that also powers the Kwid. This engine is capable of producing 53.2bhp of power at 5,678rpm along with 72Nm of torque at 4,386rpm. Power will be transmitted to front wheels via a five-speed manual gearbox.

If media reports are to be believed, Nissan is also working on a smaller 1.0-litre, 3-cylinder engine for its upcoming products. The Datsun redi Go could also get a diesel derivative, but on later stage. An AMT gearbox could also be on offer.