Vettel now just one point away from becoming 2011 world champion 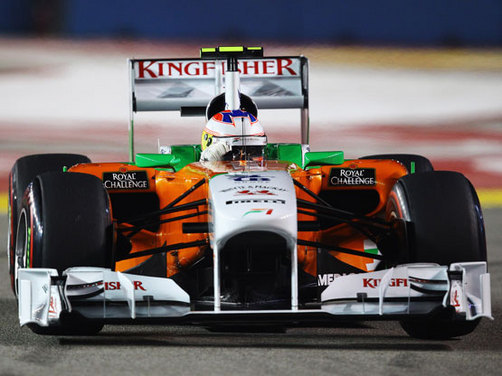 Sebastian Vettel continued to dominate the proceedings by qualifying on pole position and then winning for the ninth time this season. Red Bull’s number one driver is now just one point away from becoming the sport’s youngest back-to-back double world champion.  Jenson Button, who finished second in his McLaren, is now the only challenger left for the title with five races remaining this season. Mark Webber finished third in the other Red Bull ahead of Fernando Alonso in the Ferrari and Lewis Hamilton in the McLaren in the fifth place. Also Read - Coronavirus: After Seven Races Postponed, Formula 1 Braces For A Curtailed Calendar

Force India had the most successful weekend of the season, with both drivers qualifying in the top 10 and then finishing with 12 valuable points. Starting from tenth position on the grid Paul Di Resta climbed to sixth position, taking full advantage of tussle between Massa and Hamilton in the first lap. Similarly Adrain Sutil managed to move up one position and finished in a respectable eighth position ahead of the midfield competition. Force India is now 22 points behind Renault, and with the performance upgrade installed just before the Singapore GP, the only Indian team on the circuit is poised to overtake the French team and take fifth position in the constructors’ championship. Also Read - McLaren Pulls Out of Season-Opening Australian Grand Prix After Member Tests Positive For Coronavirus

The Singapore Grand Prix was not without its drama as Michael Schumacher (Mercedes GP) made contact with Sergio Perez’s (Sauber ) car. Although the veteran driver was unharmed, the safety car had to be deployed bunching the cars together and forcing a few strategy changes. Alguersuari was the last victim of the demanding GP when he crashed into the barriers at turn 18 on the penultimate lap.