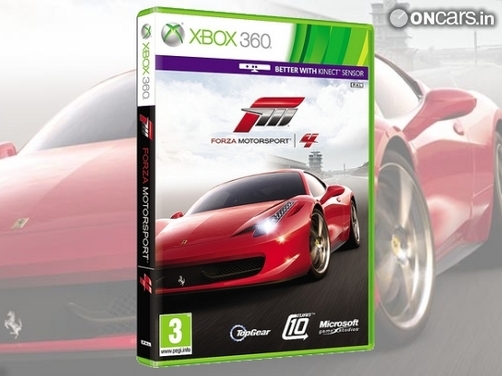 Forza Motorsport turned the fortunes for Microsoft and proved to be the ultimate gift for racers looking for a hardcore racing sim on the Xbox360 platform. Its makers, Turn10, are now getting ready for the launch of Forza Motorsports’ fourth instalment. The game made its first appearance last year when Microsoft used a part of FM4 as a tech demo for the acclaimed Kinect sensor. Also Read - Suzuki-powered Caterham Seven 160 offers old school thrills

The duo has now released the proposed box art of the DVD and info on the pre-orders. To compel buyers into booking their copy early, Microsoft is offering a five car pack in the limited edition. It includes the 1965 Ford Mustang GT Coupe, the 1997 Lexus SC300, the 2011 RUF RGT-8, the 2011 Tesla Roadster Sport and the 2011 Koenigsegg Agera which was recently launched in India.

Apart from these cars, Microsoft will also offer a unique car to the customers depending on the retailer with whom you make the purchase. Booking with Amazon will get you a Subaru WRX STi, the BMW 1-series M with Best buy, the Alfa Romeo Giulietta Quadrifoglio Verde with GameStop, the MINI John Cooper Works Clubman with Walmart and the Honda CR-Z EX with Target.

Microsoft say that there will be more in store for the customers who pre-book their copy, details about which, will be revealed closer to launch. The game is expected to come out in the next few months starting at a price of $ 59.99 (Rs. 2,500 approx.). Considering the Collector and Signature editions that GT5 launched with, we expect something similar to crop up with Forza Motorsport 4 as well!