A new variant of the Hyundai i20 has been spotted during its test rounds in southern Spain. If reports are to be believed, the spotted vehicle is said to be the upcoming performance oriented version of the i20 hatchback. The vehicle is likely to get the Turbo nomenclature just like the i30. It will get few changes from the current car and the upgrades are expected to be sportier in nature. 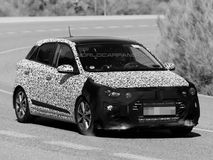 Going by the spyshots, it is visible that the new hyundai i20 Turbo features a more aggressive body kit. The vehicle is expected to get front splitter that offers both sporty looks and improved aerodynamics. It is also expected that the hatchback could get a more aggressive front grille, side skirts and a roof mounted spoiler. At the back, the i20 Turbo is likely to feature a more contoured bumper with an inbuilt diffuser. 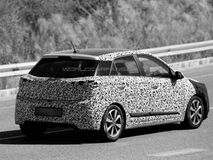 The exact engine specification of the hatchback is yet to be announced, but reports suggest that the i20 Turbo could feature a detuned version of the 1.6-litre turbocharged gasoline engine. This engine also powers the i30 Turbo. The i30 Turbo's 1.6-litre motor is capable of producing a top power output of 186PS and a peak torque of 265Nm. The detuned version of the hatchback is expected to produce about 150PS of power.