India's richest barber and his passion for Rolls Royce

We all have our favourite barber, but is yours one of the richest one in India? Well at least a select few Bangaloreans can proudly say that. Here is Ramesh Babu a barber by profession and the owner of a fleet of luxury cars by passion. The owner of Ramesh Tours and Travels, Mr. Babu started off as a barber but with a clear foresight, smart business tactics and sheer hard work, today he owns over 200 cars in his fleet lead by exotic cars like Mercedes-Benz, BMW and his personal favourite a Rolls-Royce Ghost. Here’s his tale from rags to riches. 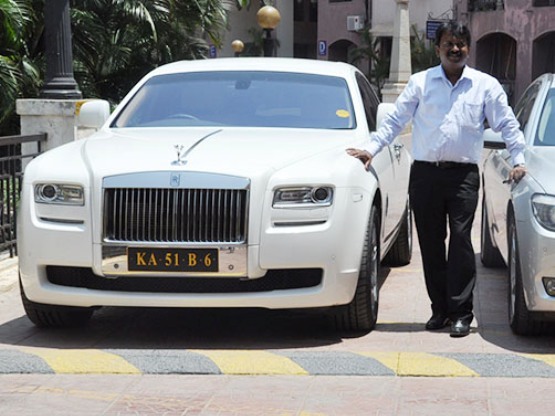 Ramesh Babu’s father was a barber who owned a small saloon in Karnataka. After he passed away Ramesh took the blades in his hands to make both ends meet. With some saving and a undying desire to own his own car, Babu bought his first ride a Maruti Omni and started renting it out to other people for additional income. With smart ideas like renting the car to software companies gave him an income that was encouraging and he slowly started to grow his fleet. Also Read - Rolls-Royce Spectre Electric Car Announced, Market Launch In Q4 2023

By the end of 1990, he was running a successful taxi operation business by the name of Ramesh Tours and Travels. In 2004, he got into the luxury car rental and self-drive business after the government opened up the tourism sector. Ramesh Tours and Travels hasn’t looked back since. Ramesh Babu bought his first luxury car in 2004 – a Mercedes-benz E-Class for INR 38 lakhs, which further grew with three more Mercedes cars and four BMWs. But his ultimate desire was a Rolls-Royce and that was satisfied with the purchase of an INR 3.1 Crore Silver Ghost, which is rents at INR 75,000 per day. Also Read - Dhanush in Trouble as Madras HC Asks Actor to Pay Rs 30 Lakh in 48 Hours on Rolls Royce Tax Exemption

Even after being one of the richest businessmen Ramesh Babu hasn’t forgotten his roots and still works as a barber. His clients embody politicians, military officers as well as movie stars such as Salman Khan, Aamir Khan as well as Aishwarya Rai Bachchan but he even cuts the hair of his regular customers for just INR 65.