Lamborghini Gallardo goes up in flames. You can stop blaming the Nano now 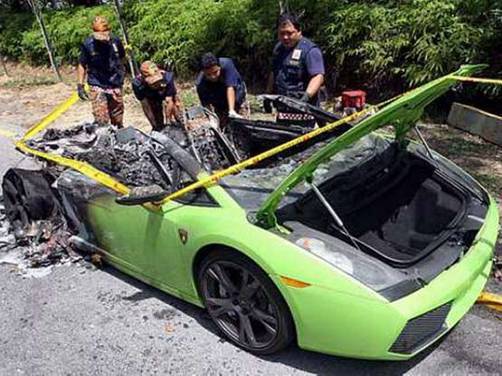 Plenty of cars go up in flames. If the Nano is the only car that comes to your head, then you are haven’t searched the internet enough for super cars being destroyed by fire. The list of Supercars catching fire tends to be a tad bit long and include exotics like Ferrari 458 Italia’s, Lamborghini Gallardo’s and so on. Also Read - Malaysian King, Queen Under Quarantine After Staff Test Positive For COVID-19

The hottest news for now is a green Lamborghini Gallardo which went up in flames in Malaysia when the owner was warming the car up. The fire ended up burning the whole car up and reduced most of it into ashes. The owner was driving on a slope when he saws smoke coming out of the engine. Although he had enough time to pull over and get out of the car, The 30 year old driver couldn’t do much to save his beloved exotic of 3 years while it went up in flames. Also Read - Fire Breaks Out in Mumbai’s Byculla, no Injuries so Far

A leaking fuel tank is being blamed as suggested by the local authorities. Although investigations are still on, the owner is yet to know if he would be allowed to claim compensation for his loss. With a Gallardo replacement around the corner, let’s hope the owner just gets all his cash back instead of a new Gallardo.