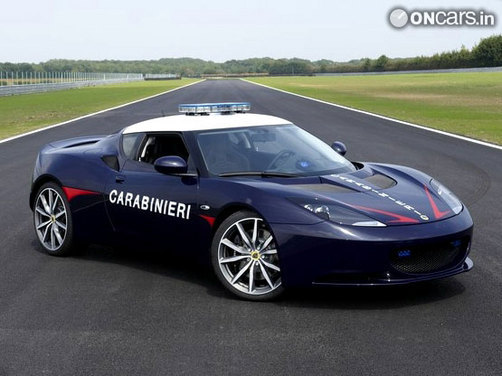 If we were in Italy this week, we would be seriously attempting to commit a crime. Reason, this here car – the Lotus Evora S patrol car that the Italian national Carabinieri now owns. We have known for a while how the Italian Polizia di Stato (the State Police) have a Lamborghini Gallardo at their disposal and this, we assume, did set off some Italian egos among the Carabinieri. Also Read - Lamborghini Huracan RWD Spyder launched; price in India at INR 3.45 crore

So they decided to go a step ahead, across to the UK car maker to give them not one, but two Evora S – one each for Milan and Rome. The cars have been loaned by Lotus to the Italians for two years. If it is a patrol car, it needs to be more than flashy so the cars come equipped with all the latest equipment, including enhanced voice recognition and a portable refrigerator for rapid transportation of organs and blood during medical emergencies. Also Read - Lamborghini Huracan RWD Spyder launched; price in India at INR 3.45 crore

The press release states that “the Arma dei Carabinieri, a division of the Italian army, play a similar role in Italy to Scotland Yard in the UK”. Perhaps that was the British inspiration.