Maruti Suzuki Baleno RS launch LIVE updates: Here we bring you all the recent updates straight from the launch event of the Maruti Baleno RS.

Maruti Suzuki Baleno RS has now finally made its official debut in India today with the prices starting at INR 8.69 lakh (ex-showroom, Delhi). Based on the standard Baleno, this hot-hatch gets several design and well as mechanical upgrades in order to boast its sporty nature. The biggest is the introduction of a new 1.0-litre turbocharged Boosterjet engine. The Baleno RS will be exclusively sold through automaker’s premium Nexa dealership outlets. Also Read - Upcoming Maruti Suzuki Cars Launching in India in 2018-19; Ertiga Crossover MPV, Ciaz Facelift, Swift RS, Vitara Brezza Petrol & WagonR MPV

7:20 PM: The event for the launch of the Baleno RS has concluded. Thanks for joining us for the same! Stay tuned to OnCars.in for the latest updated from the Indian automatic scenario! Also Read - Maruti Suzuki Baleno sells 2 lakh units in India within just 20 months of its launch

7:15PM: Maruti Suzuki plans to cut down on the waiting period of the Baleno by manufacturing it at both their Haryana as well as the now functional Gujarat plant, same to help Baleno RS as well. Also Read - Upcoming Maruti Suzuki cars launching in FY2017-18 in India; S-Cross facelift, Vitara Brezza Petrol, Ciaz facelift, new Swift & Suzuki Vitara

7:13PM: In this price tag, the Baleno RS will come loaded with all sorts of safety features. These include Dual front-airbags, seat belts with pre-tensioners and ISOFIX child-seat restrain, disk brakes on all four wheels and ABS and EBD.

7:10PM: Prices revealed, the Baleno RS, only available in the Alpha trim will retail at a price of INR 8.69 lakh (ex-showroom, Delhi) in India. 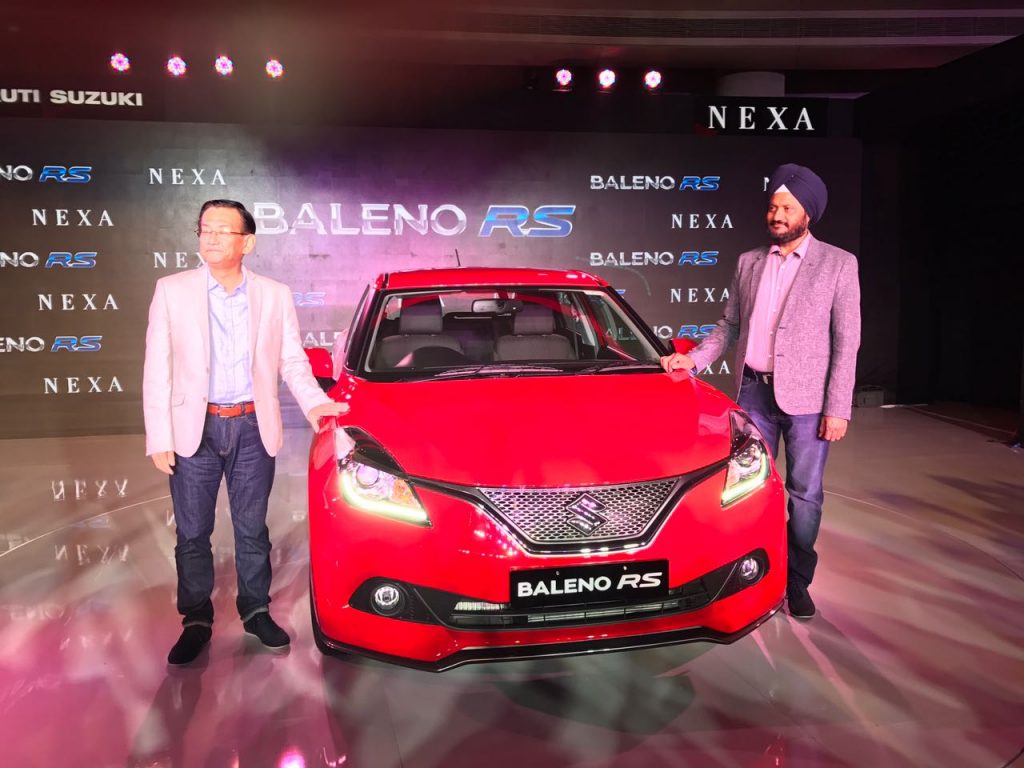 7:07PM: Here it is, in flesh! The Maruti Suzuki Baleno RS revealed!

7:05PM: The Baleno RS will be available only on the top of the line Alpha trim and hence is to come loaded with features like Smart Play infotainment system equipped with Smartphone connect and Apple CarPlay, steering mounted controls, navigation system, voice command, remote key-less entry, engine push start/stop button among the others.

7:03PM: Dimensions of the Maruti Baleno RS measure 3995mm in length, 1745mm in width and 1510mm in height. The RS is to sport a wheelbase of 2520mm while the ground clearance stands at 170mm. This hot-hatch is also quite practical and comes with a boot capacity of 339-liters.

6:58PM: The Baleno RS as known to us all is powered by a 1.0-litre, 3-cylinder Boosterjet engine which is capable of producing 101Bhp along with 150Nm of peak torque. The transmission responsibilities are careied out by a 5-speed manual gearbox. 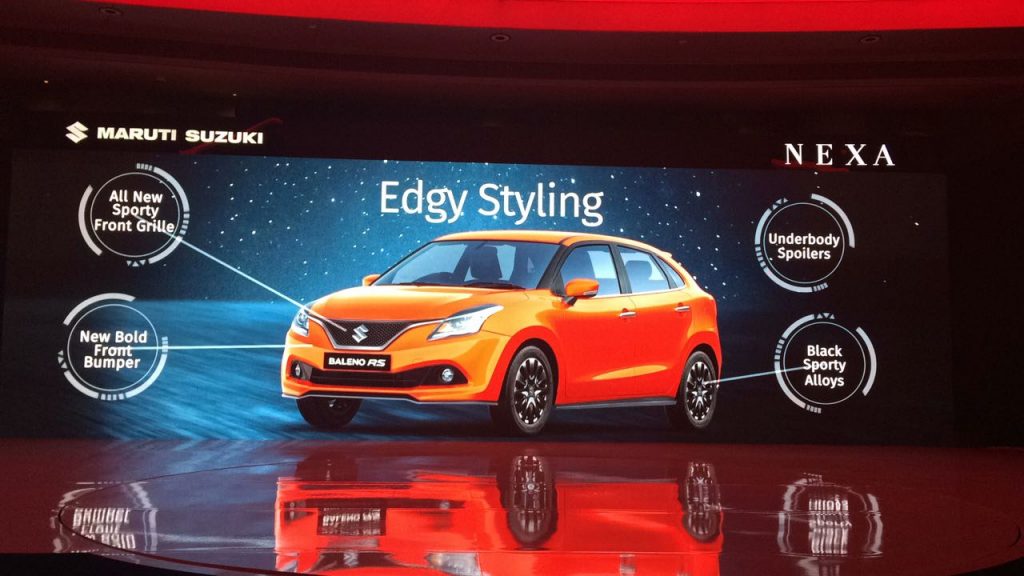 6:55PM:  The Baleno RS comes with edgy styling, in order to enhance the hot-hatches over all visual appeal. A few of the key highlights of the Baleno RS. 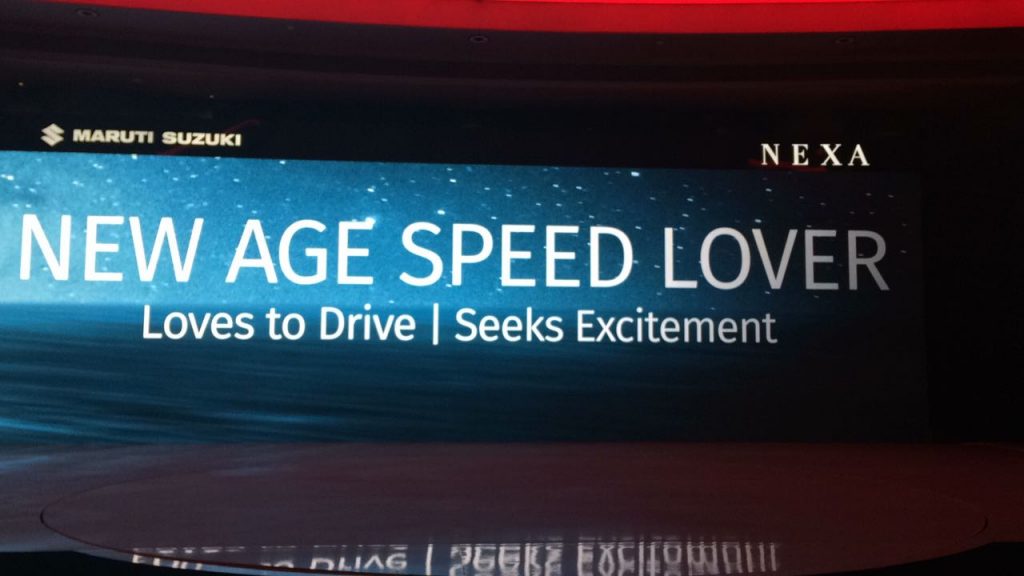 6:52PM:  The Baleno RS has been made, as said by Maruti Suzuki for ‘New Age Speed Lovers’. Another product to be based for a niche customer by the automaker.

6:50PM:  As know to us already, the Baleno RS (Road Sport) will be sold exclusively through Maruti’s Nexa dealership outlets!

6:45 PM:  The Baleno RS is based on the same Suzuki Next-Gen platform which is light in weight but high on rigidity, strength and safety. 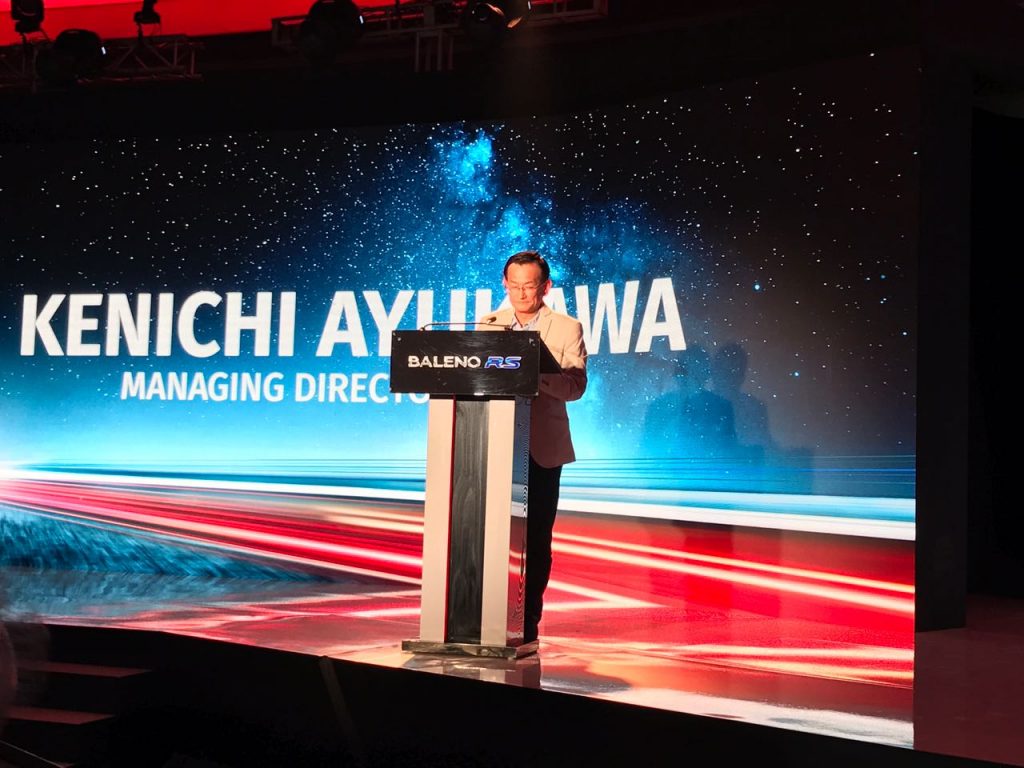 6:38PM: The Baleno RS is based out of the existing premium hatchback Baleno. Want to know what separates the two? Here read our detailed comparison report on Baleno RS Vs Baleno

6:35PM:  As a reminder, the Baleno RS is going to be Maruti Suzuki’s first ever performance hatchback in India. Introduction of future RS models depends upon the success of this very product in India!

6:30PM: As you wait for the launch proceeding to begin, here read Maruti Suzuki Baleno RS Price in India, Launch Date, Engine specification and photos: All you need to know 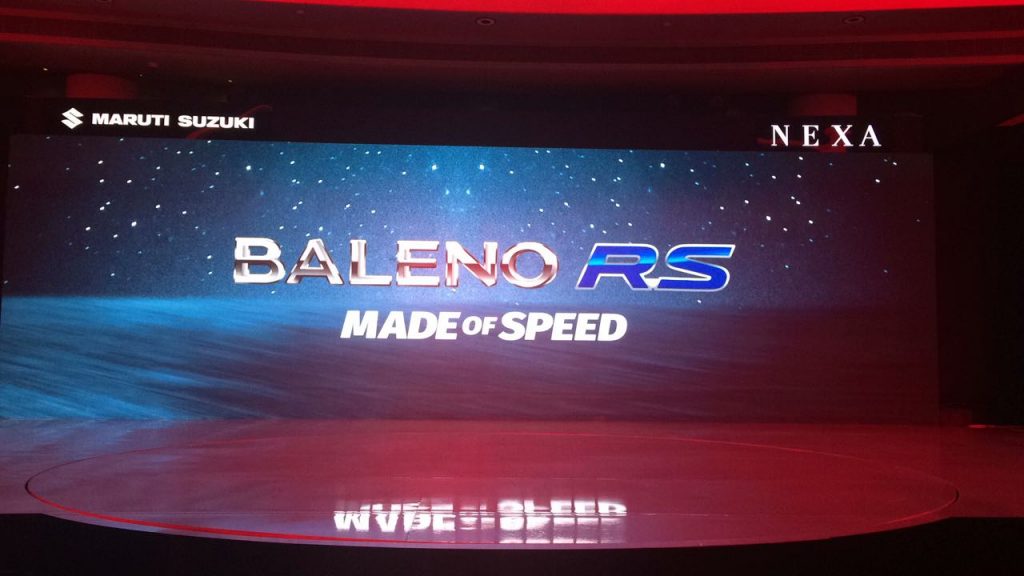 6:27PM: The event for the launch of the Maruti Suzuki Baleno RS is about to commence in a few moments. Stay tuned and keep refreshing the page for regular updates!

The Maruti Baleno RS is expected to be priced a little higher up the standard Baleno. Hence we expect the prices to fall in the range of INR 8 to 9.5 lakh (ex-showroom).

The Baleno RS is to be powered by a 1.0-litre, 3-cylinder turbocharged Boosterjet engine which is capable of producing 101Bhp along with 150Nm of peak torque. The transmission responsibilities are to be handled by a 5-speed manual gearbox. There will be no automatic transmission on offer. Do Read: Maruti Suzuki Baleno RS Price in India, Launch Date, Engine specification and photos: All you need to know

The exact mileage details of the Baleno RS have not been revealed yet however it is believed that the same is to be more fuel efficient than the standard Baleno. You may also like: Maruti Baleno RS E-Bookings open at INR 11,000

The Baleno RS is likely to be offered in two variants of namely Zeta and Alpha, the top spec trims of the standard Baleno.