The electric version of Verito sedan is all set to make its way to the Indian market on June 2, 2016. Mahindra & Mahindra, country’s leading utility maker is all set to launch its fully-electric sedan, the Mahindra e-Verito in the country on June 2, 2016. Showcased at the 2014 Auto Expo as a concept, the electric car faced many hurdles to be converted into a production model. Ultimately, the electric sedan will make its way to the Indian market on June 2 and to be offered in 3 trim levels – D2, D4 and D6 similar to that of the older version. Also Read: Mahindra XUV500 and Scorpio to get petrol engine soon Also Read - VIDEO: When Rahul Chahar Gave Wanindu Hasaranga a Fiery Send-Off! 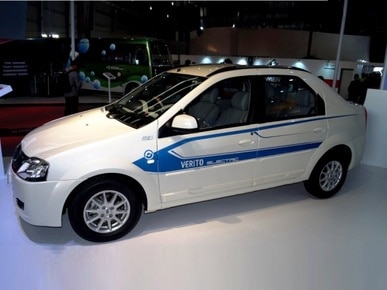 Powering this Mahindra e-Verito electric sedan will be a 72V, 3-phase electric motor that develops 40bhp of max power along with 91Nm of peak torque and can sprint to 100km when completely charged. Claimed to reach out for the top speed of 86kmph, Mahindra e-Verito can be easily used for daily commuting.

As far as the charging is concerned, the electric sedan takes approximately 8 hours to charge completely and the charging time can be further reduced to 6.5hrs by charging through fast charge mode. However, this special charging model is offered in the D6 variant only.