Mahindra and Mahindra’s Executive Director, Dr. Pawan Goenka has been appointed as at Honorary Ambassador of Foreign Investment Promotion for Korea at a special ceremony which was held in Mumbai. The company’s official statement says the Dr. Goenka was conferred with this title in the presence of several senior dignitaries and officials and under his new title will promote economic ties between India and Korea. The statement also said that he will be advising corporate India on potential investment opportunities in South Korea. 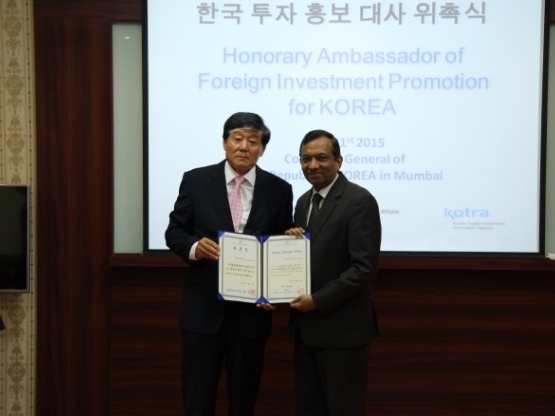 “It is an honour for me to be appointed the Honorary Ambassador of Foreign Investment Promotion for Korea. Both countries have a remarkable history of ties and a strong bilateral trade relationship which contributes significantly to the economy of the two countries. I hope to utilise this platform to encourage closer economic ties between our two nations and promote Indian investment in South Korea,” said, Dr. Goneka said, sharing his views on his appointment as the Ambassador. Also Read - Mahindra Raises Vehicle Prices, including Thar's, From Today by Up to Rs 40,000

Mr Y.C. Kim, Director General of KOTRA Mumbai said, “Dr Pawan Goenka is quite knowledgeable about Korea and we are confident that Indian investment to Korea will see a quantum jump during his tenure as the Honorary Ambassador.”

Dr. Goenka’s appointment as the ambassador followed the recently concluded Korea – India CEO Forum in Seoul, which was also attended by Indian Prime Minister, Shri Narendra Modi and Korean President, Ms. Park Geun-hye. At the Forum Dr. Goenka represented Mahindra as well as the South Korean auto company, SsangYong Motor Co. Ltd. where he is the Chairman of the Board.