Maruti Suzuki Ciaz: Production of Ciaz crosses 9,000 units before its launch in October 2014

Maruti Suzuki India seems to be getting ready with a huge number of Ciaz before launch, According to the latest report, 9000 units of Maruti’s much awaited sedan - Ciaz sedan has been seen parked inside the Manesar Plant of Maruti Suzuki,  Maruti Suzuki dealers across the country have already started taking the advance booking of Ciaz for INR 21,000 and as per the latest report from the company, Ciaz has received over 3000 bookings in just few days. Ciaz will be considered as replacement of SX4 and expected to launch by mid of October 2014 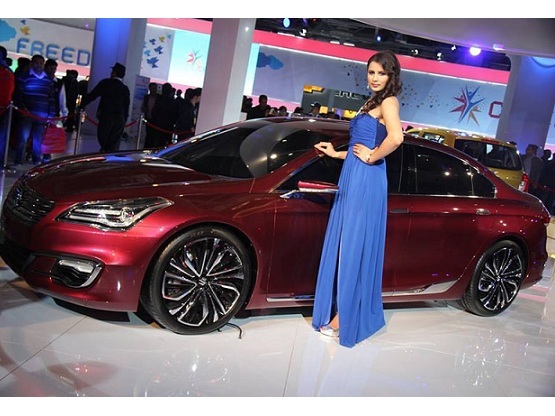 The Ciaz will be available in both petrol and diesel version, petrol (VXi, VXi+, ZXi) and three diesel engine options (VDi, VDi+ and ZDi). The company claims that Ciaz diesel has a fuel efficiency of 26.21 kmpl while petrol delivers a mileage of 20.73 kmpl.The new model will replace the SX4 sedan, which had limited success. MSI has been trying hard to gain greater presence in the bigger car segment. Also Read - Maruti Suzuki 2018 Ciaz Petrol SHVS Drive Review; Remains a Formidable Sedan

The sales growth was driven mainly by compact cars comprising Swift, Estilo, Celerio, Ritz and Dzire, which were at 46,759 units in August as against 30,512 units in the year-ago month, up 53.2 per cent.

Ciaz can give a give tough competition to Hyundai Verna, Honda City and Volkswagen Vento in the same segment. The expected price of Ciaz will be in the range of INR 7 Lakh to INR 10 Lakh