The 2018 Maruti Suzuki Swift safer, feature-rich and more fuel efficient as compared to the old Swift. For the first time, the car gets an automatic transmission on both the engines.

Earlier this month at the Auto Expo 2018, Maruti Suzuki launched its showstopper – the all-new Swift. The new Maruti Suzuki Swift is priced between INR 4.99 lakh to INR 8.29 lakh (ex-showroom Delhi) and gets completely new design, interiors and features. Based on the 5th generation ‘HEARTECT’ platform, the new Swift employs the same 1.2-litre petrol and 1.3-litre diesel engines. The new platform is lightweight, rigid and offers better safety in terms of crash protection. Owing to the lightweight construction, the new Swift deliver a fuel economy of 28.4 kmpl and 22 kmpl on  the diesel and petrol variants respectively. Here’s a comprehensive comparison between the new Maruti Swift as compared to the old model. Also Read: Upcoming Maruti Suzuki Cars Launching in India in 2018-19

Maruti Suzuki Swift New vs Old – Design Exteriors
The evolutionary design of the new Maruti Suzuki Swift is the biggest change as compared to the old model. The overall design is completely revised while keeping the Swift DNA intact. Changes include a new hexagonal grille, revised LED taillights and the redesigned bumper on the front end, while the side profile sports larger 16-inch alloy wheels as against the 15-inch on the old model, sloping roofline, blacked out C-pillar and a relocated rear door handle on the C-pillar. As compared to the old Suzuki Swift, the rear section of the new Swift is revised with a compact tailgate, redesigned LED taillights, rear spoiler and revised rear bumper design. Also Read: Maruti Suzuki Swift 2018 Photo Gallery – 8 HD images 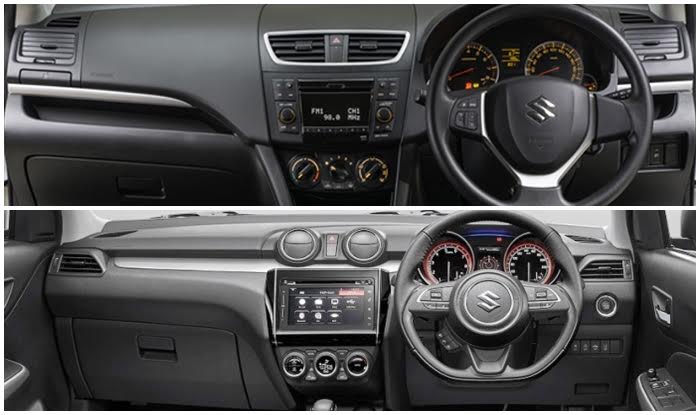 Maruti Suzuki Swift New vs Old – Design Interiors
The new Maruti Suzuki Swift 2018 carries over the evolutionary design changes on the interiors as well with the new flat-bottom steering wheel, twin-pod instrument cluster, touch-screen display on the centre console, new layout for the dashboard and updated internal bits. The car gets new fabric upholstery for the seats, improved legroom, headroom and shoulder room. Moreover, the switch gear on the new Suzuki Swift is new as well. On the other hand, the old Swift carries a lot of old switch gear while the interior design has been around for quite some time now. Read More: Maruti Swift 2018 Bookings, Launch Date, Price in India, Interior, Images 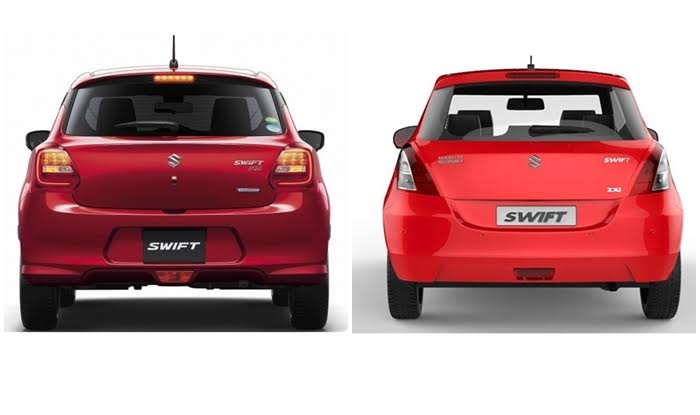 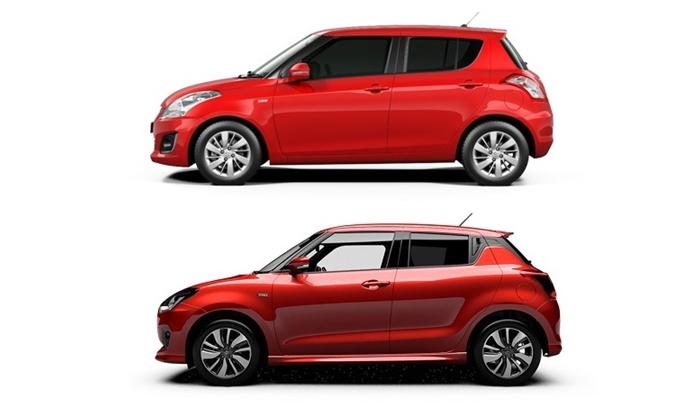 Maruti Suzuki Swift New vs Old – Engine Specifications
The new Maruti Suzuki Swift gets the same engine options as that of the old Swift with the biggest change being the introduction of an AMT transmission. The 1.2-litre four-cylinder K-Series petrol engine produces 83 BHP of power and 114 Nm of peak torque and comes mated to 5-speed manual and an AMT gearbox. On the other hand, the Swift diesel is powered by a 1.3-litre DDiS motor producing 74 BHP of power and 190 Nm of peak torque, mated to a 5-speed manual and a 5-speed AMT transmission. The automatic gearbox on the old Maruti Suzuki Swift was only available with the 1.2-litre K-Series petrol engine.