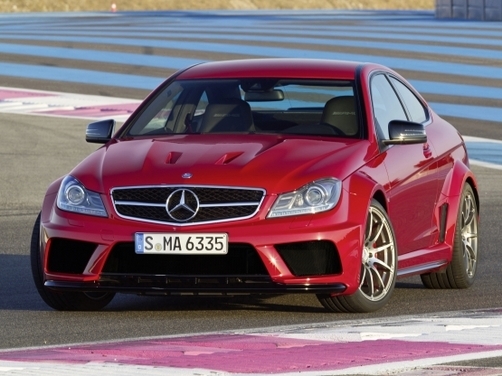 Mercedes has revealed the C63 AMG Black Series, the more evil twin of the evil twin of the C-Class. At the heart lies the 6.2-litre V8, now with 518PS. Then it's borrowed the rear axle from the E63 leading to a 79mm wider rear track. Balancing that is a 40mm wider front track. While borrowing the axle, it swiped the 390mm front/360mm rear brakes and the 255/35 ZR19 front and 285/30 ZR19 rear tyres from the bigger car as well. The 40 per cent limited-slip diff that is an option on other AMGs is standard.  Also Read - Watch | This Russian YouTuber Dropped His Rs 1.4 Crore Mercedes From a Helicopter

All of the extras mean… less weight. That's thanks to the seats – they've thrown out the rear bench as always (but strangely have kept it an option) and installed lightweight front ones. Specify a track package and you'll get the optional carbonfiber rear wing, semi-slick Michelin Cup tyres and active cooling for the rear diff.  Also Read - F1: Charles Leclerc Edge Past Lewis Hamilton And Valtteri Bottas to Win Ferrari's 1st Italian GP Title in 10 Years

The C63 AMG Black series will go on sale in January 2012 and Mercedes hasn't announced a specific number for production, but the last three models sold 1000 units combined, so you can be sure that a sighting of one of these will be rarer than most exotics.