Ford, the American automaker is gearing up for the launch of much-awaited Ford Figo Aspire in the Indian car market. Adding to it, the company will also launch the new 2015 Endeavour SUV, which is likely to go on sale by October, 2015. The designing and styling of the SUV is inspired from Ford's Edge design philosophy. It will be made available in two common rail diesel engine- 2.2-litre 4-cylinder and 3.2-litre 5-cylinder. 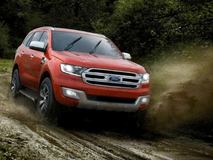 The new Endeavour is claimed to offer excellent off-roading capabilities, and is equipped with various latest technology-based features. If reports are to be believed, the company plans to assemble the SUV in its India based plant, and might also manufacture some of its part to keep its cost down. Also Read - Ford Endeavour silently recalled for faulty headlight levellers; Ford denies

Talking about engine specs, the 2.2-litre TDCi engine with turbo chargers and 4 cylinders is capable of producing 158.24bhp of power and 385Nm of torque. On the other hand, the 3.2-litre Duratorq 5-cylinder diesel unit churns out 197.13bhp of power and 470Nm of torque. This engine is coupled to a six-speed automatic gearbox which sends the power to 4-wheels of the SUV. The new Ford Endeavour is equipped with Ford's Terrain Management System that changes throttle response, gear, differential, and traction control on the driver's request.

The new Ford Endeavour comes with a huge 225mm of ground clearance, and is claimed to offer a water wading capacity of 800mm which is just 50mm less than the Range Rover. This shows that the vehicle would offer excellent driveability on rough terrains.