Honda Amaze has recently received a much needed mid-life facelift. The car was first launched in 2013, but didn’t receive any updates while the competitors launched new products or updated their offerings. With the launch of the facelift version, we compare the new Honda Amaze with the old model. 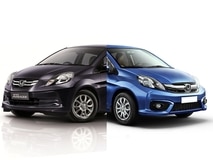 Design
As compared to the old model, the new Honda Amaze looks refreshing with the addition of a new dual-slat chrome grille, muscular front bumper with integrated fog lamps and wider air-dam. The side profile remains unchanged for most parts while it gets sharp lines and creases similar to the outgoing model. The car rides on 15-inch petal design alloy wheels. The rear section of the new Amaze is flanked by a newly designed tail lights while the boot-lid features wrap around chrome garnish bar connecting the tail lights. The boot-lid features the Amaze branding, engine badges while the Honda insignia is placed at the centre. Also Read - Match Highlights CSK vs RR IPL 2021: Clinical Chennai Super Kings Beat Rajasthan Royals by 45 Runs

As compared to the old model, the new Amaze gets touchscreen automatic climate control as compared to the manual air-con system with twist knobs. The dashboard features rectangular air-con vents as opposed to the round ones in the old version. The new Amaze also gets a new instrument cluster with blue-accentuated dials while the touchscreen satellite navigation has been dropped.

The Amaze gets dual SRS airbags as an option on the base variant while ABS with EBD is standard on the base diesel variant. The Amaze comes with the Honda Connect App for complete safety & convenience. Also Read: Honda Amaze the best CVT automatic in India

Engine Specifications
The Honda Amaze is powered by a 1.2-Ltr i-VTEC petrol engine that pumps out 88bhp of maximum power and 109Nm of peak torque, while diesel variant is powered by a 1.5-ltr i-DTEC diesel engine that produces 99bhp of power and 200Nm of peak torque. Transmission duties are done by a 5-speed manual gearbox while the petrol variant is also offered with a CVT automatic transmission. An interesting thing to notice is that the automatic petrol variant delivers a slightly better mileage than the manual petrol variant. The new Honda Amaze delivers a mileage of 18.1kmpl for the petrol CVT variant as against the previous model that delivered 15.5kmpl, while it delivers 17.8kmpl for the petrol manual variant. The diesel variant of the car delivers an excellent mileage of 25.8kmpl.

Verdict
With the introduction of so many new features in the mid-life facelift, the new Honda Amaze has introduced itself as a very strong contender in the sub-compact sedan segment. The car now looks more appealing and is fairly priced. Backed with the Honda after sales service and the decent service network, the new Honda Amaze is a lucrative deal for customers willing to buy a compact sedan.