Expected to launch in India towards the end of this year, Honda Civic 2018 will rival big names like Toyota Corolla Altis, Hyundai Elantra, Volkswagen Jetta and others in the D-segment.

Honda Car India seems to be betting big on the premium segment in the domestic market as the fact that the Japanese car maker reintroduced Accord nameplate in a hybrid avatar in the year 2016. To take things further, the car maker unveiled the 10th generation Honda Civic at the recently concluded Auto Expo 2018. Slated to launch in the country by the second half of this year, Honda’s longest selling automotive nameplate – Civic has been listed on the official website ahead of launch. Moreover, the new Amaze 2018 sedan is also listed on the official website. See More: Honda Amaze 2018 listed on official website ahead of India Launch; Price in India likely to start from INR 6 LakhAlso Read - Honda to Launch New City Hybrid on This Date | Check Features, Price Here

On the mechanical front, the Civic sedan will be offered in both petrol and diesel engine options for the first time. The petrol unit will be 1.8 liter i-VTEC petrol, making about 140 Bhp while the diesel engine is likely to be a .6 liter i-DTEC all aluminium unit tuned to make 120 bhp and 300Nm of peak torque. The oil burner will be manufactured locally at Tapukara facility in Rajasthan. Transmission duties will be carried out by 6-speed manual gearbox as standard while an optional CVT will also be on offer for the petrol engine. Read Also: Honda Working on Compact SUVs based on Honda Amaze Platform Also Read - New-Gen Honda Civic Gets 5-Star Safety Rating At ASEAN NCAP 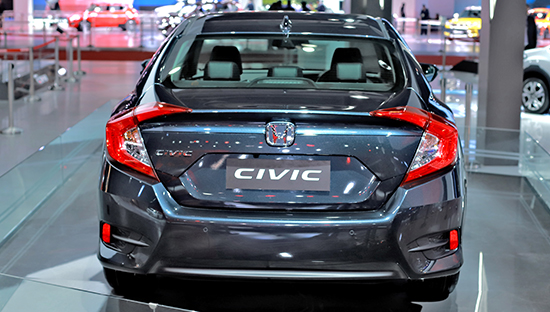 As far as the pricing is concerned, the new Honda Civic 2018 will be brought into the domestic market via CKD route. So expect the new Civic sedan to carry a competitive price tag of INR 13 lakh to 18 lakh (ex-showroom). Once launched in the domestic market, the new generation Honda Civic will take on the players such as Toyota Corolla Altis, Volkswagen Jetta, Hyundai Elantra, Skoda Octavia and the likes. Ever since its introduction in the domestic market in the year 2006, Honda Civic had many buyers making it a big hit which was still in production till the year 2013. The company is yet again geared to revolutionize the D-segment sedan space with its latest offering which will go on sale towards the end of this year.