Likely to be based on tenth generation Honda Civic platform, the new Honda CR-V has been rendered based on the testing mule spotted while testing.

We reported earlier that, Japanese car maker, Honda is currently working on its upcoming 5th generation Honda CR-V. Likely to launch in the year 2017, the SUV is expected to be sport seven adult seats. Auto Facil, a Brazil based magazine has rendered the next generation Honda CR-V SUV that proffers a better look to it. Moreover, Honda CR-V has been spotted couple of times that derives that the upcoming model will be slightly longer compared to the current generation one. Also Read: Next Gen Honda CR-V Coming in 2017: Could be a 7-Seater SUV Also Read - Alia Bhatt Announces Her Production House' First-Ever Film 'Darlings' Along With Shah Rukh Khans Red Chillies 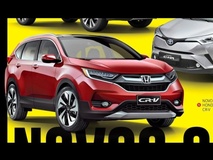 Also Read - LPG Price Hiked by Rs 25, Delhiites Have to Pay Rs 819 For a Cylinder | Check Rates in Your City

The rendering image draws cues from the testing mule which was spotted while testing in the US. On the front, it gets a combinational design of tenth gen Honda Civic as well as current gen Honda CR-V along with new trapezoidal that is flanked by LED and well sculpted bumper. On the sides, the profile almost remains the same with some minor tweaks. The rear profile sports new sporty L-shaped tail lamps that show resemblance with new Civic and Acura Concept SUV-X. Also Read - BSH vs TRS Dream11 Team Predictions, Tips And Hints ECS T10 - Barcelona 2021: Captain, Vice-Captain And Probable XIs For Badalona Shaheen vs Trinitat Royal Stars Match 78 at Montjuic Olympic Ground March 1 Monday 5:00 PM IST

It is expected that two row seating will be standard across the global market while the third row layout may be offered as an option in selected markets.

As far as the engine specs are concerned, the next generation CR-V are yet to be confirmed. However, it is speculated that the SUV might borrow engines from Civic which could be 2.0-litre VTEC and 1.5 turbo VTEC petrol options. Moreover, the company might also include new 1.6-litre or 1.8-litre diesel engines. The transmission functions are likely to be carried out by a 6-speed manual or a CVT gearbox.