The next generation Honda CR-V SUV will be a seven-seater and will be equipped with new petrol and diesel engines. 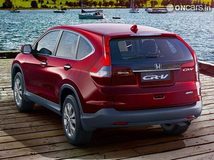 We informed you earlier that Honda, the Japanese automaker is working on the next generation Honda CR-V SUV, which is likely to offer a comfortable seat for seven adults. The vehicle is likely to be launched in 2017. Speaking to Go Auto, Stephen Collins, Honda Australia director reveals that the next generation Honda CR-V is likely to be launched in 2017. Also Read - Govt To Give Rs 3000 Crore Credit To Serum Institute, Rs 1500 Crore To Bharat Biotech To Boost Vaccine Production

He further reveals that the company is focussing more on technology, specifically in its engine specification. Speaking to Go Auto, Collins said, “I think we are looking at everything. I think engine technology is an important point that we are looking very closely at. We are looking at how can we expand opportunities more into the lower end of the larger SUVs and the seven-seat question comes up. So we are exploring all of those opportunities.” Also Read- Next Gen Honda CR-V to get 7-seat option Also Read - Match Highlights CSK vs RR IPL 2021: Clinical Chennai Super Kings Beat Rajasthan Royals by 45 Runs

The next generation Honda CR-V SUV has been spotted testing for quite some time, and spyshots suggest that the vehicle will be slightly longer than the outgoing model. The spotted vehicle comes with longer body and rear door, indicating that a third row to accommodate two extra passengers. The vehicle is expected to be launched in countries where the company is not selling the full size Honda Pilot SUV. Also See- Honda BR-V SUV in Images

The exact engine specifications of the next generation Honda CR-V is yet to be known. It is likely to share powertrain from the 2016 Honda Civic, which is likely to include a 2.0-litre VTEC and 1.5-litre turbo VTEC petrol. The company might also add a new 1.6-litre or 1.8-litre diesel engine to the next CR-V. Transmission duties are likely to be carried out by a 6-speed manual or a CVT option.