German Luxury car-maker Mercedes Benz is working on the next generation A-Class which is expected to be launched in 2018. 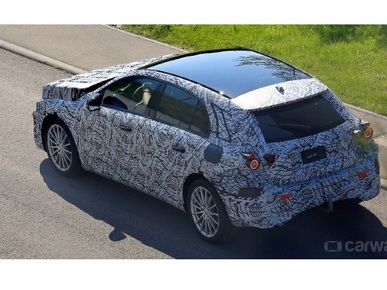 We have come across some new spy shots of the next generation Mercedes Benz A-Class testing around Europe which are floating over the internet. The German luxury car-maker has currently its third generation A-Class going on sales, the A-Class has been sold in the Indian market for the past four years now. We have already informed you that the Mercedes Benz is having a new generation model of the A-Class in its pipeline; this can be expected to be launched by 2018.  Also Read - List of Top Premium Smartphones in India to Buy in 2020

As usual the test mule that has been seen on the spy images is heavily camouflaged and covers almost all the important parts making it impossible to identify the updates. But one thing for sure is that the new generation model will be having considerable changes in design. From outside the car looks more or less similar in size to the current model, it looks to be a little low sitting and has a more slopping roofline. The thick looking C-Pillar gives a hint that there might be a redesigned hatch coming with edgy and sharper look compared to current model. Also read: 2016 Mahindra Bolero Facelift coming soon: Spied Also Read - Radhe Shyam: Makers Unveil Prabhas Aka Vikramaditya's First Look And Fans Can't Keep Calm!

The next generation A-Class will not share the current MFA platform, instead the company plans to build the new car based on the all new platform that will result in making the car lighter, improves performance and gives better mileage. With targeting the younger users, the car-maker will offer the 2018 Mercedes Benz A-Class loaded with latest features and premium cabins, some of the features include stylish LED headlamps and tail lamps along with electronics line adaptive cruise control and semi-autonomous driving system. Also read: Tata is working on Q5 SUV based on Land Rover Discovery Platform

As far as the engine options are considered, there won’t be any major changes and the company will offer the same petrol and diesel engine which are mated to the manual and automatic dual-clutch transmissions. However the Indian variant of the Mercedes Benz A-Class can be expected only in an Automatic gearbox.