Next generation Honda Brio launch in 2018: Likely to get diesel engine

The next generation Honda Brio could get an all-new 1.2-litre diesel engine; launch likely in 2018. 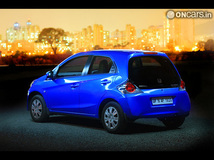 Honda, the Japanese automaker is planning to launch a range of new cars in the Indian car market in next 2-3 years. We informed you earlier that the Japanese automaker will introduce the next generation Honda Amaze compact sedan in 2018. Interestingly, the company is also working on the next generation Brio hatchback which will also go on sale in 2018.  Also Read - UPPCL Technician Admit Card 2021 Released At upenergy.in, Check Direct Link And Other Details Here

If reports are to be believed, Honda is working on a smaller 1.2-litre diesel engine. It is expected that the next generation Brio will get this new engine. It is the smallest hatchback in the company's lineup in India, which has received mixed response from car buyers in the country. The next generation Brio is likely to get a more matured profile. Codenamed 2UA, the small car will rival against the likes of the Hyundai Grand i10, Ford Figo and the Maruti Suzuki Swift.  Also Read - NEET 2021: Indian Army Offers Free Coaching to Underprivileged Students in Srinagar

This year, the company will launch the much-awaited Honda BRV compact SUV and the Accord Hybrid sedan. Honda also plans to introduce the updated CR-V SUV and the Jazz based crossover- codenamed 2FM – in the Indian car market in 2017. The Jazz cross will be pitched against the likes of the Hyundai i20 Active, Fiat Avventura and the Volkswagen Cross Polo. If media reports are to be believed, Honda is also planning to launch the HR-V SUV to compete Hyundai Tucson, Mahindra XUV500 and the Renault Kaptur.