Nissan Kicks compact SUV will be based on the Nissan's V-platform that also underpins the Micra and the Sunny sedan. 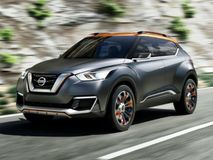 Nissan, the Japanese automaker is all set to unveil the production version of the Nissan Kicks compact SUV on the inaugural day of the Rio Olympic and Paralymic Games starting from May 3, 2016 in Rio de Janeiro state. The compact SUV has been specifically designed and developed for the growing nations including Brazil and other South American countries. If rumors are to be believed, the company could also launch the Kicks based SUV in India in near future. Also read: Datsun Redi-Go Global Unveil Live Updates: Get Expected Price, Features & Specification of Redi-Go hatchback Also Read - Mumbai Local Train Latest News: Anguished Over Maharashtra Govt’s Decision, Passenger Associations Plan to Approach PM Modi For Travel Approval

Unveiled at the 2014 Sao Paulo Auto Show as concept, the Nissan Kicks is likely to be launched in Brazil in mid-2016. Previous reports suggest that Nissan could trim the platform to achieve a sub-4 metre length. If the current model comes, it will rival against the likes of the Renault Duster, Hyundai Creta and others in its league. Nissan is currently selling Terrano SUV in India, which failed to generate volumes for the maker. In order to introduce Kicks SUV, Nissan could phase out Terrano SUV from India; however, nothing concrete on the same has been revealed by the maker. Also Read - Do Kids Need To Be Vaccinated To Attend School? This Is What WHO Has To Say

Reports suggest that the Kicks SUV will be based on Nissan's V-platform that currently underpins the Micra hatchabck. The SUV measures 4,300 meters in length, which makes it a worth competitor to Hyundai Creta and others in the segment. The Brazilian spec model will be powered by a 1.6-litre flex-fuel (petrol/ethanol) engine. The India-spec model is likely to get a 1.5-litre diesel and 1.6-litre petrol engines.