Delhi government is commencing the second phase of the Odd-Even scheme from April 15. The Poochh-O app will help in making commuting easier during this period. 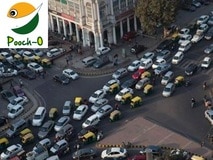 The second phase of Delhi government’s odd-even rule is about to commence from 15th April 2016 in order to reduce the rising pollution levels and the state’s traffic problems. Delhi CM, Mr. Arvind Kejriwal, had recently announced guidelines for the second phase of the Odd-Even scheme. According to this scheme, women drivers, CNG operated vehicles, chief ministers of other states and vehicles carrying students in uniform will be exempted from this scheme. The Delhi government’s Poochh-O app will make commuting easy during this phase. Also Read: Guidelines for the second phase of Odd-Even scheme announced Also Read - Tokyo Olympics 2021 LIVE Updates: Women in Blue in Action at 8:30 AM IST in Historic Q/F

The Poochh-O app enables taxi and rickshaw drivers to connect to a common server with the help of a GPS connected device in their vehicles. On the other hand, commuters can register themselves on the app and can book a ride through their Smart phones. The app displays the available vehicles in the vicinity so that customers can book a ride for their commute. The Poochh-O app currently has support for services like auto rickshaws, taxis, Delhi Transit busses as well as traffic related information. Following are the details of each of the above mentioned services. Also Read - DU Admission 2021: Delhi University to Start Registration Process For UG Courses Today, Portal to Go Live by 3 PM

NextBus
This service is currently available only for the orange Delhi Transit busses. The app provides information about occupancy display, route details, location tracking of the bus and the trip planner function.

Traffic
The traffic service provides information about traffic jams anywhere in Delhi for the past 25 mins, user feedback on traffic for the past hour, traffic search and traffic congestion map at any given time.

Talking about the Odd-Even scheme, Delhi CM, Arvind Kejriwal said, “Women drivers, CNG-operated vehicles, chief ministers of states and vehicles carrying students in uniform will remain exempted from the restrictions of the second phase of odd-even traffic scheme.” The government has also launched a dedicated helpline to get more information on the second phase of the Odd-Even scheme. The chief minister added, “People can call on 011-422400400 if they have any questions related to odd-even traffic scheme.”