We have been constantly informing you about Renault India's plans for the upcoming Delhi Auto Expo 2016. The company will launch the Duster facelift with AMT gearbox at the biennial Auto Show in February. Adding to it, the company is also planning to unveil the AMT-equipped variant of the Kwid hatchback at the show. 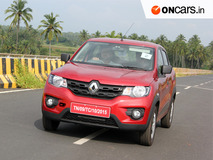 We informed you earlier that Renault is working on a more powerful version of the Kwid hatchback. According to ET Auto, the company will unveil the Renault Kwid small car with a 1.0-litre petrol engine along with an AMT equipped variant. The new 1.0L petrol motor could be a stripped down version of the 1.2L engine that also powers the Renault Pulse and the Nissan Micra. A bored out version of the new 0.8-litre 3-cylinder engine could also power the small car; however, nothing concrete on the same have been revealed. Also Read - Delhi MCD Election Results 2021 LIVE Updates: Counting Of Votes Underway, AAP Leading In 4 Wards

The Kwid 1.0L will target the Hyundai Eon 1.0, Maruti Suzuki Alto K10 and the Maruti Suzuki Celerio. The current engine is capable of producing 52bhp and 72Nm of torque; we expect that the new 1.0L motor could churn out close to 65bhp and 90Nm of torque. If reports are to be believed, the powerful variant will get ABS (Anti-Lock Braking System) and dual front airbags as standard safety feature. Moreover, the regular variants are likely to get driver-side airbag as an option.

Launched in September, the Kwid has been an instant hit in the Indian auto market with over 75,000 bookings within 3-4 months. The company has increased the production of the car to meet the rising demand.