Rolls-Royce celebrates 100 years of the Sprit of Ecstasy 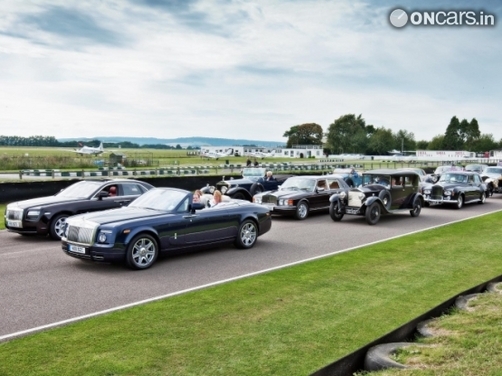 Last Friday, July 15, 2011, one hundred Rolls-Royce cars gathered at Goodwood to commemorate the centenary year of the ‘Spirit of Ecstasy’. Rolls-Royce models from 1911 all the way to 2011 were presented by members of the Rolls-Royce Enthusiasts’ Club, who joined VIPs, media representatives and neighbours from the three local parishes for a day of celebrations. Rolls-Royce organised seminars on the production of the Spirit of Ecstasy and Bespoke Design, an exhibition by celebrated photographer Rankin inspired by the Spirit of Ecstasy, a manufacturing plant walkabout, Grand Picnic Lunch and English Afternoon Tea, for the 500 guests that were present at the event. Also Read - Rolls- Royce: Tycoon Buys 30 Rolls-Royce Cars for Macau Hotel

The celebration concluded with a cavalcade of all 100 cars around the Goodwood Motor Circuit led by a new Phantom Drophead Coupé – a truly historic moment that will be long remembered by everyone who took part first hand or witnessed it. The cars then continued on their journey for a weekend of Club celebrations in the New Forest, concluding with a Concours d’Elegance at the National Motor Museum at Beaulieu. The display included the entire Phantom and Ghost families, provided by Rolls-Royce Motor Cars.
Rolls-Royce is expected to run a series of events and activities throughout this year to commemorate the Spirit of Ecstasy. Also Read - Rolls-Royce Motors Planning to Launch its New Model by mid-2016