The car gets a redesigned fascia; engine options likely to remain same.

Right from the time Tata organized the Horizonext event, it was clear that the Indian carmaker had started working to head the brand in the right direction, to improve the products and to get its customers and market share back. A total of eight models (MY2013 variants of some of the current cars) were launched but a couple of cars were left untouched back then. One of them was the Indica Vista and now, from the revealing post by TeamBHP, it's clear that the 2014 version of the B2 segment hatchback is currently being tested. Also Read - No EMI, no Down-payment, Only Pay Monthly Rent And Drive Tata’s Expensive Cars For 3 Years | Details Here 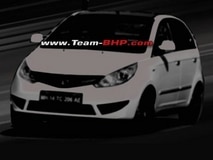 Although the picture posted is far from clear, it's not too tough to make out that the front-end has changed. As the report suggests, it looks similar to the Manza Hybrid Concept. The front bumper too gets a makeover. The rear is also expected to be updated, while as can be seen from the pictures, overall design remains as it currently is. Engine options too will remain unchanged. Also Read - Indian Billionaire Ratan Tata’s Elegant Sea-facing White House Will Make You Believe in Simple Living

The car is expected to be displayed and launched at the 2014 Auto Expo. To know more about the current Tata vehicles on sale, click here.